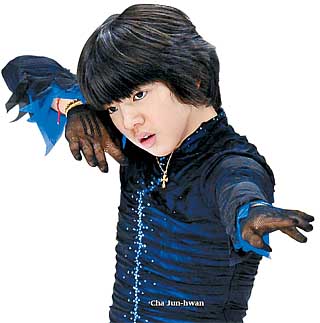 He earned 153.70 points in Saturday’s free skate, two days after scoring 71.85 points in his short program.

Dmitri Aliev of Russia won the gold medal with 240.07 total points. He was the leader after the short program with 81.37 points, and also topped the field in free skate with 158.70 points. His fellow countryman, Alexander Samarin, scored 155.44 points in free skate to finish in second place with 236.52 points overall.

Cha trailed three Russians after the short program. Aliev was the leader with 81.37 points. Roman Savosin held down the third spot at 72.98 points.

The first to perform in the free skate, Cha opened with a clean triple lutz-triple toe loop combination. He then nailed a quadruple salchow, the most difficult element in his program, and followed it with solid triple jumps.

In the latter half of the program, however, Cha botched the landing of his triple flip, costing himself a full point. He managed to close out the program with a clean spin, and waited to see where he would finish.

Next up, Savosin managed only 139.41 points in the free skate to lose his slim short program lead over Cha, ensuring the South Korean would finish no lower than third. Savosin ended in fourth place with 212.39 points total.

Aliev, the last to skate, established his new season best in the free skate to clinch the title.

Training with renowned Canadian coach Brian Orser, Cha is considered an outside medal contender at the 2018 PyeongChang Winter Games.