Not too long ago, 28-year-old Kim Ha-jin, who works in publishing, ditched her cumbersome zip-up wallet with a separate coin pouch for a simple card holder with just a few slots. The use of credit cards and mobile payment apps has become so common in Korea, Kim says, that she rarely finds herself carrying any notes or coins.

Backed by an advanced technological infrastructure and growing tech-savvy demographic, Korea is on its way to being a cashless society, if not a “less cash” society. Last year marked the first time credit card transactions outpaced cash, according to the Bank of Korea.

The country’s central bank is welcoming the trend, since eliminating the use of cash would free it from the cost of minting money, not to mention the burden of managing and discarding ruined ones. Increased convenience on the consumer’s end is another big reason for the push.

But the central bank would rather tiptoe toward a cashless society than make a radical jump. The Bank of Korea will first experiment with the idea of a “coinless society” to gauge the potential benefits and risks of going completely cashless. In a roadmap announced on Dec. 1, the bank proposed reducing the circulation of coins by 2020.

In the first phase, it will target convenience stores since they tend to hand out change in coins. Next year, the Bank of Korea will introduce a system where customers at convenience stores can deposit loose cash into reloadable cards like T-Money, public transit passes and gift cards.

“The main objective is not to go cashless altogether,” said Kim Jung-hyeok, head of the Bank of Korea’s e-finance planning team, a division that leads the project. “We will first see whether we can reduce circulation by adopting a deposit system. If the system is well received and proves effective, the project will result in reduced circulation of cash as a consequence.”

Kim added that customers can still choose whether to receive change in cash or on card.

The central bank plans to extend the scope of its deposit system to other retailers in 2018.

During the second phase of the project, the Bank of Korea plans to help consumers deposit loose change into bank accounts.

“We have yet to decide the timeframe for the second phase,” Kim said. “We have developed the model, but the participants are not yet decided. We will take into account the result of the convenience store proposal, which will be carried out as pilot project next year, after we select operators in charge of the pilot project.”

Where cash is no longer king

There was a time when cash was the most common payment method, according to the Bank of Korea’s annual transaction surveys, but the surging use of plastic and mobile payment methods has made cash payment somewhat passe.

The share of cash transactions decreased from 38.9 percent in 2014 to 36 percent last year, while credit card transactions jumped from 31.4 percent to 39.7 percent. When incorporating debit and prepaid cards, plastic becomes the most used payment method.

Analysts believe the advent of mobile payment apps will boost card usage since debit and credit cards can be saved on the apps. The country’s three major mobile payment services - Kakao Pay, Naver Pay and Samsung Pay - have seen a constant rise in users. The number of Kakao Pay users has surpassed 10 million, Naver Pay has around 4.5 million and Samsung Pay has about 2.5 million, based on monthly statistics.

“When I go out for just a quick errand, I bring only my smartphone to make small transactions on mobile payment apps,” said Kim Ha-jin, the 28 year-old working in publishing.

Given that many countries in Asia still use cash as the predominant payment method, Korea’s shift stands out. In a 2013 report, MasterCard said the country is at a “tipping point” toward becoming a cashless society, though it still falls behind many countries in Europe, especially in Northern Europe.

“In South Korea, cashless payments account for 70 percent of the total value of consumer payments,” the report said, though it is highly likely the percentage has gone up since then. “The findings put South Korea in a category we describe as ‘Tipping Point,’ alongside countries like Singapore, Japan and the U.S.A. While successful in eliminating large consumer cash payments, these countries have not reached the same point in their cashless journey as countries like the Netherlands, Canada and Australia.” 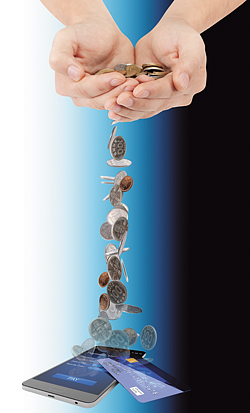 Beyond following payment method trends, the central bank has another reason for pushing the abolition of coins: the cost.

On top of that, the bank has to shell out about 2.2 billion won to discard old coins. The costs are high considering that coins are heading toward obsolescence. In a survey of 2,500 Koreans conducted between June and September, 46.9 percent said that they did not use coins even when they received loose change.

Lee Hyo-chan, a researcher at the Korea Credit Finance Association Research Institute, believes the move to ditch coins, and eventually all forms of cash, can help the government save money. “A cashless system can help ease inefficiency prevalent in parts of the country’s economy,” he said, adding that other anticipated benefits include the possibility of reducing illegal financial transactions like bribery and tax dodging.

“When we look at the correlation between the size of the so-called underground economy and cash use as a portion of GDP, the lower the usage, the lower the size,” Lee said. “In spite of the fact that Korea has relatively fewer cash transactions, the size of the underground economy is still big, so we need to restrain cash transactions and prop up cashless payments.”

His view is in line with other major financial institutions abroad. DNB, Norway’s largest bank, has called for the country to stop using cash because it would shrink the black market and curb money laundering.

There are still some risks associated with a cashless society. Critics warn of threats to privacy as well as increased vulnerability to sophisticated internet crimes.

“The thing that matters is how the government will protect the system from potential infringement of security and privacy,” said Cho Nam-hee, head of the Financial Consumer Agency, a consumer advocacy group. “A cashless system is typically vulnerable to cybercrimes and hacking.”

Against this backdrop, the MasterCard report gave Korea a low rating in terms of preparation to go cashless. “South Korea’s Readiness Indicator score was 69, close to the scores of Spain, Taiwan and the United Arab Emirates. Readiness is a composite of macro-economic measures found to be correlated to consumer cash usage,” it noted.

“While scoring well for financial inclusion, ease of doing business and size of informal sector, Korea’s Readiness Indicator was negatively impacted by relatively low scores for measures of competitiveness, and relatively low adoption of debit cards.”

Kim Jung-hyeok of the Bank of Korea admitted that the country still needs more work in order to create a stronger security system for a cashless society.

“The proposed deposit system at convenience stores is relatively safe because the transaction is made through prepaid cards and not credit cards,” Kim said. “But when we open the second-phase plan that will transfer loose change to people’s bank accounts, we may need more advanced security systems to protect users’ accounts from potential breaches.”

Other critics raised issue with the fact that tourists who do not have global credit or debit cards will be negatively affected. Privacy advocates in particular have expressed concern that ditching cash will leave people with no way to purchase something without being tracked.

Cho of the consumer advocacy group also raised the possibility of stores raising prices to avoid giving out as little change as possible. “If the government tries to cut down coin use, the retailers will likely push up prices by 1,000 won rather than 100 won to prevent any loose change,” she noted.

But Kim of the central bank countered the concern, arguing that retailers are not likely to react in that way. “The deposit system can be done in existing cash registration systems without the need to install new ones,” Kim said. “So they don’t have reason to do so.”