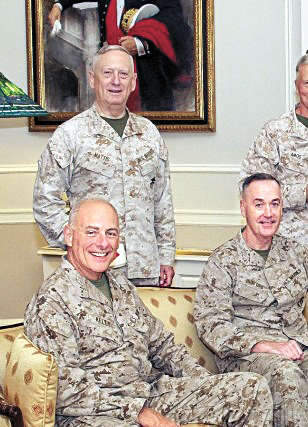 During the Iraq War in 2003, the U.S. Forces’ main ground unit was the First Marine Division. In the U.S. armed forces, the Marines are the combat troops that spearhead battles. They are proud that they are not the supply or backing forces in the rear.

Then commander of the First Marine Division was James Mattis, former commander of U.S. Marine Forces Central Command. Mattis was recently nominated as the next U.S. Secretary of Defense by President-elect Donald Trump. On Dec. 8, Trump chose Maj. Gen. John Kelly, ex-commander of U.S. Southern Command to head the Department of Homeland Security. Joseph Dunford, Chairman of the Joint Chiefs of Staff under Obama was the commander of the 5th Marine Regiment during the 2003 invasion.

The three generals experienced the Iraq War together and are close, according to the U.S. media. The Washington Post reported that Mattis and Kelly recommended each other as defense secretary when they each met with Trump. Dunford’s term runs through 2017, and Business Insider predicts, “Typically, Joint Chiefs chairmen serve two terms, and having comrades like Mattis and Kelly in Dunford’s corner would make it much harder for Trump to replace him.” So it is likely that the three are likely to serve together in the Trump administration.

Mattis’ nickname is “Mad Dog” and Dunford is known as “Fighting Joe.” Kelly lost his son in the war in Afghanistan. They are fighters to the core. Mattis and Kelly are in charge of two key tasks that Trump pledges to tackle — eradicating ISIS and border control. The Post predicted, “Perhaps Kelly’s most visible role would be to help oversee Trump’s signature campaign promise: a wall along the U.S.-Mexico border to keep out illegal immigrants.”

The New York Times analyzed, “Turning to the retired officers reflects Mr. Trump’s preference for having strong, even swaggering, men around him.” But some think that Trump is making up for his weakness in foreign policy and national defense by appointing military commanders with good reputations who share his style.

The question is whether the war heroes could be masters of administrative affairs. Commander and secretary are two different jobs. A commander leads soldiers but a secretary has to face Congress, bureaucrats and citizens. A comrade risks his life, but a cabinet member must survey public sentiment. If not, it could turn into a war cabinet.