Kimchi fridges have evolved since their birth 30 years ago. These days, the market is dominated by standing fridges instead of the cooler-type fridges that open from the top. 1. The 1984 Goldstar Kimchi Refrigerator, with a capacity of 45 liters, by LG Electronics, then known as Goldstar. 2. Dimchae by Winia, which significantly expanded the kimchi fridge market. 3. Samhan Saon, the first kimchi fridge with a drawer on the bottom, released in 1999. 4. Dios Kimchi Tok-tok, the latest model released by LG Electronics this year. [EACH COMPANY]

On an otherwise peaceful Sunday of Nov. 27, an LG Electronics factory line in Changwon, South Gyeongsang, was going full tilt to keep up with soaring demand for kimchi refrigerators.

“So many orders have been put in for kimchi refrigerators this year that we had to start a month early - in September - and operate full-time,” said Lee Won-goo, the director of LG’s refrigerator manufacturing. “The popularity of standing kimchi refrigerators has particularly gone up, and we had to increase production by more than 40 percent compared to last year.”

Gimjang, or the kimchi-making season in Korea, has heated up the kimchi refrigerator market. According to analysts, kimchi refrigerators sold 10 percent more this year compared to the previous year. The number of units sold, as calculated by business insiders, has gone up from 1.05 million in 2013 to 1.2 million in 2015, and 1.3 million this year.

There are two types of kimchi refrigerators that are sold in the market. One is the cooler-type, which opens from the top, and the other is the standing model, which open in the same way as regular fridges. Although the former type was the first on the market, the latter is leading sales now. Consumers value the decorative aspect of the standing type, as well as the fact it’s a lot easier to reach things inside the fridge. 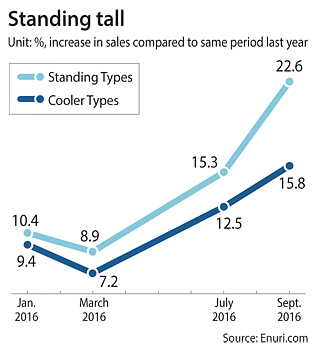 Based on data from Enuri, a Korean website for comparing the prices of all kinds of products, the sales of cooler-types and standing types were growing steadily, shoulder to shoulder, earlier this year. That was until July when the peak autumn season started approaching, and the standing types started pulling away. Of the standing types, the model that saw the biggest increase was a large size standing fridge with four doors, two on the top half that open side-ways, and two on the bottom that open like drawers. Sales of the four door model jumped 40.9 percent in October compared to the same month in 2015.

This trend is apparent in the numbers for the three biggest kimchi refrigerator manufacturers: Samsung Electronics, LG Electronics and Dayou-Winia. Samsung Electronics said that it sold 20 percent more of its Zipel Assak, its kimchi fridge brand, in the first two weeks of November compared to the same period last year. Sales for Zipel Assak M9000, the large size standing type, grew by 30 percent. Winia is also pushing forward its new 2017 Dimchae model as its main product.

Whereas in the past, kimchi refrigerators were used exclusively for kimchi, the current trend is that they also function as a secondary fridge to store other food as well.

“Kimchi refrigerators can adjust the specific temperature of each compartments for different purposes, such as preservation, freezing and kimchi maturing,” said Shin from LG Electronics. “It’s efficient for storing food for long-term usage, because people don’t open the doors as often as they do for ordinary refrigerators.”

The kimchi refrigerator first hit the Korean market in 1984 when LG Electronics introduced its 45 liter kimchi fridge. Made in the size of a traditional kimjang pot, the giant pot that people store underground during the winter season, the company introduced the product as an appliance that “can maintain the appropriate temperature for preserving and maturing kimchi, and the [ordinary] fridge stays free from kimchi smell.” In the following year, Daewoo Electronics came up with a similar product. But both companies struggled since people were still preserving kimchi in underground pots.

Industry insiders expect the growth in kimchi fridges to become more polarized in the future. While some families seek bigger fridges to store large amounts of food, single-person households or couples living by themselves prefer a smaller fridge in which the compartments are adjustable so that they may also use it as a regular fridge or kimchi fridge.

The multi-functional Klasse kimchi refrigerator manufactured by Dongbu Daewoo Electronics is the smallest of the standing types with a storage capacity of 102 liters. The model has sold over 50,000 units in the three years since its launch.