A Ph.D. in recorder not afraid to toot her own horn

A Ph.D. in recorder not afraid to toot her own horn 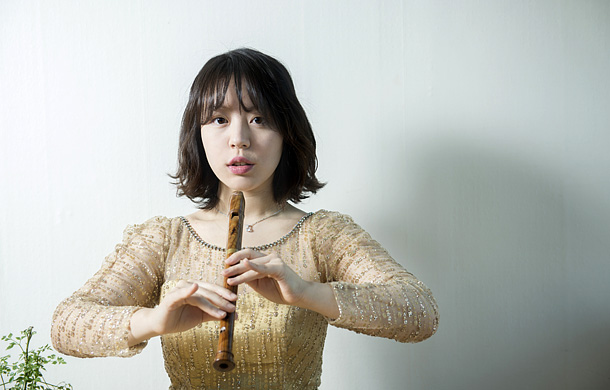 Recorder player Euncho Yeom says she once damaged her shoulder ligament because she practiced the instrument so much. [WOO SANG-JO]

The recorder is generally considered an easy instrument to play.

However, the recorder possesses a delicate and precise tone, which is why Euncho Yeom, a professional recorder player, has been mesmerized by the instrument for the past dozen years.

“People think that the recorder is a very easy instrument, but the player’s skill is precisely reflected in the sound,” the 24-year-old Yeom says in a recent interview. She played classical tunes of Vivaldi solely with her soprano recorder to the reporter.

Yeom earned a bachelor’s, master’s and doctorate degree with her recorder skills.

At the age of 16, Yeom flew to Switzerland to enter the prestigious Zurich University of Arts where she earned a bachelor’s degree in the department of recorder.

Then she moved to Basel to study at Schola Cantorum Basiliensis, where she obtained her master’s degree.

Her passion for recorder didn’t stop there. She moved to London afterward to enter the Guildhall School of Music & Drama, where she finished her doctorate in recorder in just one year.

In 2012, she won an international record contest which took place in Niedersachsen, Germany. She gained more fandom in Korea recently when she starred in a TV show called “My Little Television,” where she appeared to teach singer Jeong Eun-ji how to play the recorder.

She became the most-searched term on major web portals at the time.

“I heard Jeong used to enjoy playing recorder during her childhood,” Yeom says. “She came across my videos and requested the producer of the show to cast me. It was a good chance to introduce the recorder to a wider range of people.”

The recorder is an instrument which had its heyday during the Baroque period in the 17th century. The instrument was widely enjoyed even before Western classical music was fully established.

It comes in many types, too. The instrument is available in soprano, base, alto and tenor. It can also be made with various materials including plastic, olive tree wood and ivory.

Yeom says she first encountered the recorder’s charms when she was just an elementary school student.

“I thought it was some kind of magic that my breath could turn into such a beautiful sound,” she says.

She enrolled in a prodigy education program at Korea National University of Arts when she was just in sixth grade.

In order to get better at recorder, she even took swimming classes to better develop her lung capacity.

But a student like Yeom was rare in Korea. Not many people devoted themselves to learning the recorder, so she received home schooling during middle school and went back and forth to Switzerland to get recorder lessons.

Yeom says she heard a lot of people saying, “I used to play the recorder well when I was young,” but that didn’t stop her from pursuing harder.

Yeom says she dreams of being a “musictainer,” a portmanteau of music and entertainer.

She uploads videos of herself playing the instrument on social media as much as she can to reach more people.

On Thursday, she will have a concert at the Jaeneung Culture Center in Jongno District, central Seoul. She plans to join forces with an instrument company to give recorder lessons to students starting next year.

“I want to let the public know how attractive the recorder can be,” Yeom says.