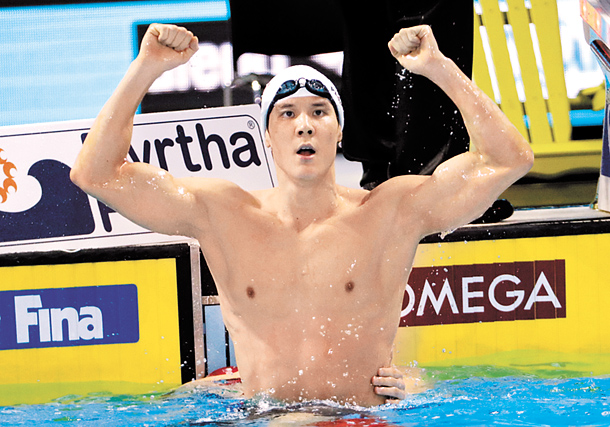 “Marine Boy” Park Tae-hwan has opened a new chapter of his swimming life.

The Korean swimmer won the men’s 1,500-meter freestyle at the FINA World Short Course Swimming Championships in Windsor, Canada, on Sunday, with a record time of 14 minutes, 15.51 seconds, his third gold medal at the world’s top short course swimming competition.

Park already won gold in the 200-meter and 400-meter freestyle at Windsor.

The short course worlds take place in 25-meter pools, half the length of Olympic-sized pools. Park is making his first appearance at the 25-meter world competition since April 2006 in Shanghai, and the first at any short course meet since November 2007.

Park was second in the qualifying heats, and was assigned the fifth lane in the final. He and Paltrinieri competed closely, but Park never gave up the lead after 800 meters.

“It is rare for a swimmer to compete in both middle-distance races and long-distance races because managing a swimming race is very different,” said Min Seok-ki, a research fellow at the Korean Institute of Sport Science. “Park seems to excel in adjusting his rhythms depending on each race. Park was lackluster at the Rio Olympics, but he is returning to his strengths through training hard since Rio. Park is past his prime for a swimmer, but he is overcoming his limits.”

Park, who won the gold in the 400-meter free at the 2008 Olympics, competed in the 100-meter freestyle about 15 minutes after completing his 1,500-meter race, but settled for seventh place with a time of 47.09 seconds.

Simonas Bilis of Lithuania won the gold medal at 46.58, edging out Shinri Shioura of Japan by 0.01 second. Tommaso D’Orsogna of Australia was third at 46.70.

The short course worlds is Park’s final meet of 2016. He is ending a roller-coaster year on a high note.

The 27-year-old served an 18-month doping ban that ended in March. He then challenged the Korean Olympic Committee (KOC) at an international court for the right to compete at the Summer Olympics in Rio de Janeiro Summer in August.

Park was granted his wish barely a month before the Olympics, but had disastrous performances in Rio, where he failed to make it out of the qualifying rounds in the 100-meter, 200-meter and 400-meter free. Park withdrew from the 1,500-meter race at the last minute.

Park, however, bounced back to capture four gold medals at the Asian Swimming Championships in Tokyo last month.

“I am really pleased to win three gold medals at this competition. I will be in good shape to compete at the World Swimming Championships in Budapest, Hungary in July,” said Park.