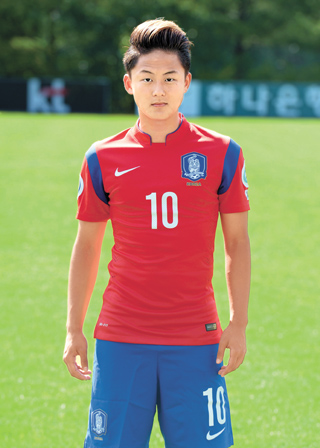 Known as “Young Messi” by local football fans, 19-year-old Lee Seung-woo showed off his best form on Monday, pulling a hat trick during a match in Spain’s youth league. His excellent performance has given him a boost before he joins the senior team of FC Barcelona early next year.

In round 14 of the 2016-17 season of the Division de Honor Juvenil A League, the junior footballer played as a wing for his team FC Barcelona Juvenil A. Lee pulled off three goals on his own at the 13th minute, 37th minute and the early part of the second half. Lee helped his team to a 4-1 finish to top the league.

Hat tricks carry special meaning for players. While Lee had already netted five goals in the last 10 games of the season, his three-goal rush in a single match has him tied with teammate Jordi Mboula in total number of goals scored. While Mboula had scored eight goals in 16 games, Lee outmatched his colleague with the same number of goals in a smaller number of games.

The Korean attacker had not been able to participate in all the matches, having had to attend other events such as the Suwon International Cup. Lee has not tallied any goals in the UEFA Youth Champions League yet, with just two assists in three games, but the latest action has put more confidence in the rising star for upcoming games.

The hat trick is especially welcome since Lee awaits his promotion to the senior B team. FC Barcelona had placed Lee on the Juvenil A team to warm him up, and now the club plans to promote Lee to the senior team by early next year.

“Seung-woo had been in Juvenil A for so long because the club had taken into consideration how Lee had been banned by FIFA from playing in official matches until he turned 18,” said an associate of Lee. “He plans to join the B team next year and is waiting for the last stage to be promoted to team A, but we don’t worry too much because he shows strong confidence.”

On the day of Lee’s hat-trick, halfway across the world on Jeju Island, Korea’s U-20 team was gearing up for off-season training ahead of the FIFA U-20 World Cup in May. The team will be led by a new coach, Shin Tae-yong, through Dec. 23 to check their capabilities. Despite his absence, Lee made an impression on Coach Shin with news of his hat trick.

The U-20 World Cup is another chance for the young Lee to make himself known to the world. Fans are excited to see him perform, especially since the event will be hosted by Korea.

“If I make it to the U-20 team, I would like to compete with players similar to my own age and see how we have all developed ourselves over the years,” Lee said via his father after the game on Monday. “I’m ready to surprise all the global fans who watch the Korean matches.”