The great architect as a complete artist : A rare glimpse at work from Le Corbusier, the godfather of modern architecture

The great architect as a complete artist : A rare glimpse at work from Le Corbusier, the godfather of modern architecture 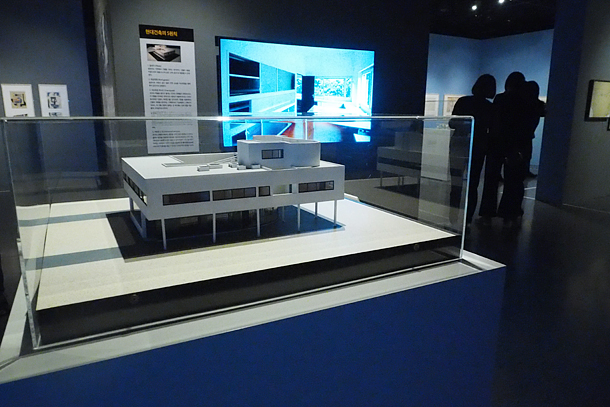 A large-scale retrospective of Le Corbusier in Seoul displays about 500 sketches, paintings, tapestry and models of his works including the renowned Villa Savoye, a modernist villa designed by Le Corbusier and built by his cousin Pierre Jeanneret between 1928 and 1931 in Poissy, on the outskirts of Paris, pictured above. [FLC/ADAGP, 2016]

The man whose distinctly spectacled face is printed on the 10 franc note is Charles Edouard Jeanneret, better known as Le Corbusier (1887-1965), the godfather of modern architecture and one of the most respected architects in the world. But Fondation Le Corbusier, a private foundation established by the architect himself in Paris, describes Le Corbusier as a “complete artist.”

In an effort to “show that Le Corbusier was not only a renowned architect but also a complete artist,” the foundation gave the green light, for the first time in its history, to ship out dozens of more than 100-year-old previously-unseen drawings by Le Corbusier for the “Le Corbusier Exhibition” that kicked off on Dec. 6 at the Hangaram Design Museum in Seoul Arts Center.

“He was a complete artist touching all the media, creating paintings, drawings, enamels, sculptures and tapestry,” said Daniele Pauly, a professor at the Laboratory of History of Contemporary Architecture (LHAC) in Paris who works on the side for the Fondation Le Corbusier. Pauly visited Seoul to oversee the exhibition that’s being organized by a local exhibition operator Covana Contents.

“So the focus of the exhibition is to show the relationship between the preparatory drawings, paintings, sculptures and sketches with the architecture he designed,” she added.

“The Fondation Le Corbusier decided to disclose about 140 drawings and sketches by Le Corbusier that have never been out in public before,” said Kim Keon-hee, president of Covana Contents. “As the Seoul exhibition is the first large-scale retrospective of the architect following the inscription of 17 of his architectural works last summer, the foundation allowed such delicate works to be exhibited here.”

Most of the architectural works inscribed on the Unesco World Heritage List are archaeological sites and ancient ruins. But last July, 17 of Le Corbusier’s buildings, mostly made of concrete, made the list. The 17 buildings, including the Mill Owners Association Building in Ahmedabad, India, the Maison La Roche in Paris and the Cabanon de Le Corbusier in Nice, France, are spread across seven countries. Although Korea doesn’t have any buildings by the great architect, this is the first large-scale exhibition to celebrate the inscription.

“We were lucky with the timing,” said Kim. “Covana Contents began planning the exhibition on Le Corbusier three years ago and luckily, his buildings became Unesco World Heritage sites so we were able to greater develop the exhibition thanks to the active support by the Fondation Le Corbusier.” 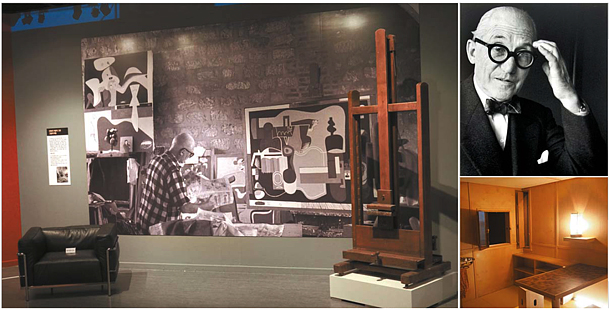 Left: Le Corbusier’s easel has left his studio apartment in Paris for the first time to be a part of the Seoul exhibition. Top right: Le Corbusier wearing his distinct round spectacles. Bottom right: A replica of Le Corbusier’s wooden cabanon where visitors can see what it was like to live in such a small space. [FLC/ADAGP, 2016]

The exhibition that’s divided in eight sections has been organized in the chronological order of Le Corbusier’s life, displaying about 500 works of paintings, sculptures, drawings, sketches and models.

After walking through the first part of the exhibition displaying photographs of the 17 buildings on the Unesco World Heritage List, visitors can see dozens of sketches and watercolor drawings on small pieces of paper hanging side by side. This is where most of the 140 undisclosed works are uncovered.

“Born in La Chaux-de-Fonds, a small city in Switzerland near the French border, Le Corbusier went to an art school to learn ornamental design, chasing and engraving. But his teacher, Charles L’Eplattenier, saw great potential in young Le Corbusier and advised him to become an architect,” said Kim, during a press tour of the exhibition on Dec. 6, prior to the opening.

Pointing to a small 18 by 16 centimeter watercolor drawing of “Etude Stylisee de foret” (1905) Kim said that this drawing is what determined the teacher to persuade Le Corbusier to study architecture.

There’s also a section displaying the drawings and paintings he did while on a journey east in 1911.

Here, visitors can see his sketch of the Parthenon, one of the monuments he had most admired.

“Le Corbusier was so mesmerized by this building that he spent three weeks solely visiting the Parthenon,” said Kim. “Here, Le Corbusier proclaimed it ‘the repository of the sacred standard, the basis for all measurement in art.’”

Upon seeing the Parthenon, Kim said that Le Corbusier began to believe that “an efficient, industrialized architecture was the only way to avoid class-based revolution,” which can be witnessed in his later works like the famous “Unite d’habitation,” the world’s first large-scale concrete apartment block in Marseille, France in 1952.

“This period was a very revolutionary period for Le Corbusier,” said Pauly. “It is when he developed the new conception of housing and of making architecture, which is in parallel with the paintings in his earlier years.”

Towards the end of the exhibition, Le Corbusier’s easel is on display - allowing visitors to remind themselves of the “painter side of the renowned architect.”

According to Covana Contents, the easel, too, has never left Le Corbusier’s studio apartment in Paris to be exhibited elsewhere, but the foundation allowed it to leave for the exhibition in Seoul.

“Le Corbusier’s apartment was temporarily closed for remodeling after the Unesco inscription,” said Kim. “Since the apartment is closed, we asked if we could bring the easel to Seoul to include in the exhibition and they kindly accepted our proposal. After the exhibition, the easel will go back to Paris and never travel again.”

The final section displays 1:1 replica of Le Corbusier’s holiday home in the south of France facing the Mediterranean sea. This 172-square-foot minimal unit is equipped with a super single sized bed, where his wife Yvonne slept, a sink, a table and a toilet.