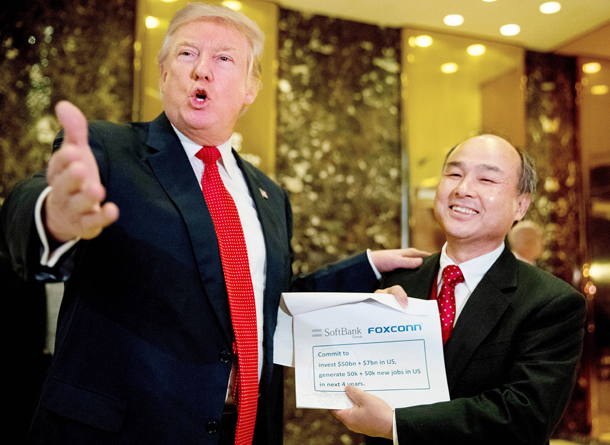 Donald Trump has attracted plenty of criticism for his efforts to bully companies into keeping jobs in the U.S. Capricious as his actions may seem, though, they do raise some important questions about how we should define economic success.

Economists including Paul Krugman, Larry Summers, Tyler Cowenand John Cochrane have roundly lambasted Trump for his acts of populism — such as pressuring manufacturer Carrier into preserving about 1,000 jobs in Indiana. They point out that 1,000 is nothing in a country where millions of jobs are eliminated and created every month. They also worry that the presidential micromanagement undermines the rule of law.

But that’s just one way to look at it. Big changes often start in small and inconspicuous ways, and it’s entirely legitimate for the president to use his position to promote a broader shift in values. In Trump’s case, that shift could be a departure from the currently dominant policy view — founded on strictly economic analysis — that it’s okay for companies to move manufacturing jobs to other countries in the pursuit of greater profitability and competitiveness.

Trump voters appear to feel that companies should have other values, including some allegiance to their employees and to the communities in which they’ve thrived and profited. It’s a sentiment that finds some support in the work of MIT economists Daren Acemoglu and James Robinson, who argue that seemingly logical economic decisions have a political dimension that can undermine their benefits — a reality that economic purists all too often ignore.

Consider labor unions. Economists typically think they distort markets and advise setting limits to their power. Yet unions have played a crucial role in supporting democracy around the world, and in balancing the interests of workers with those of business and political elites. Over the past few decades, policies that aim to improve economic efficiency by curbing union influence have also changed the political landscape — probably not in a good way, judging from labor’s shrinking share of national income.

Concerns about the rule of law are also a matter of perspective. No one has suggested that Trump broke any laws in his deal with Carrier.

Economists’ worry seems to be that the president-elect has gone beyond what they see as the government’s proper role of setting and enforcing broadly applicable laws and property rights. They see a threat to the rule of economics — to the idea that business decisions should be judged solely in the context of narrowly defined costs and benefits.

Such economic purism has been complicit in the rise of inequality in recent decades, and has played a large part in setting the stage for our current political upheaval. Given these glaring flaws in what has been the dominant ideology, it’s fair to ask if companies that thrive in the U.S. — enjoying its infrastructure, technology and publicly educated workers — shouldn’t also bear some responsibility for their communities’ broader well-being.

What to do? There are no easy answers. Finding a better way will require experimentation. Should we encourage a revival of unions? Or try something along the lines of the German model, with labor representatives on corporate boards as a matter of law? Surely we’re unlikely to find a solution by doubling down on the same inflexible and unimaginative thinking that got us into trouble in the first place.
Trump may lack anything resembling a coherent plan. He may also be a dangerous threat to fundamental American ideals. But it isn’t wrong to think that government should seek to define and defend human values, rather than merely surrendering to economic forces. It should be clear by now that we can’t leave everything to the invisible hand.


*The author, a physicist and science writer, is the author of the book “Forecast: What Physics, Meteorology and the Natural Sciences Can Teach Us About Economics.”