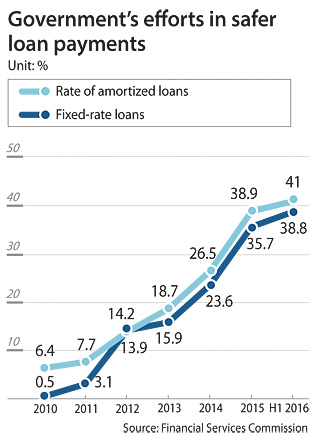 With the U.S. central bank teeing up for its first interest rate increase in a year, Korean financial authorities are raising the target rates for fixed-rate mortgages to lower risks that could affect both the financial market and the overall economy.

Financial Services Commission Chairman Yim Jong-yong said Monday that the government will be raising its targets for next year in converting mortgages to fixed interest-rate loans and encouraging debtors to pay back the principal on their loans instead of only paying interest on those loans.

The aim is to convert 45 percent of all flexible-rate mortgages to fixed-rate ones, an increase over the government’s initial target of 42.5 percent. Additionally the target on amortized loans, or ones where the borrower pays both principal and interest, will rise from 50 percent to 55 percent of all loans.

“The rate at which household debt is growing is fast and as much there is a need to speed up structural reform on [improving] the quality [of debt],” the FSC chairman said at a joint meeting with the Financial Supervisory Service. “And as result we have decided to raise our targets for next year’s [portion of] fixed interest rate and installment payments.”

Since February, the government has required principal loan installment payments on new mortgage under stricter loan guidelines. This same rule applies to new loans that are taken out by homebuyers hoping to pay off loans for apartment construction.

Since the Lee Myung-bak administration was in office, the government has been trying to contain the ever-growing household debt. This idea of encouraging borrowers to change their mortgages to fixed rate and amortized loans as a preemptive measure against a possible rise in the country’s key interest rate surfaced in 2011.

Despite the government’s effort to curb household debt by tightening its regulation on the sales rights of pre-construction apartments, especially in the heated market of Gangnam, southern Seoul, debt continued to increase sharply according to a recent report.

According to the banking industry debt, which slightly dropped in October, bounced back in November. Fresh loans borrowed from the leading six banks - Shinhan, KB Kookmin Bank, KEB Hana, Woori, NH Nonghyup and the Industrial Bank of Korea - are estimated at 5.49 trillion won ($4.7 billion). This is the second largest amount of fresh loans taken out in a month so far this year. As a result the loan balance at these banks is reportedly 531.8 trillion won. Of the borrowed money, mortgages account for 57.6 percent, or 380.6 trillion won, 3.16 trillion won more than the previous month.

A recent study by Statistics Korea showed that the disposable income, especially among those in the bottom 10 percent, has declined sharply.

On average, disposable income as of the third quarter this year grew 0.7 percent compared to a year ago. This is a further drop from the 1 percent in the second quarter.

The lower 10 percent by income saw their disposable income plummet 16 percent year-on-year, a faster drop than the 4.8 percent reported in the second quarter.

If the Bank of Korea raises the key interest rate under such circumstances, analysts say this will only add to household financial burdens and lead to consumers tightening their purse strings.

The Korean economy is already facing a critical situation with third quarter quarterly growth revised down to 0.6 percent from 0.7 percent. The Korea Development Bank recently projected that the growth in the fourth quarter will be flat due to the recent Choi Soon-sil scandal that affected both business and consumer confidence.