Nuclear plants to fortify against quakes

Nuclear plants to fortify against quakes 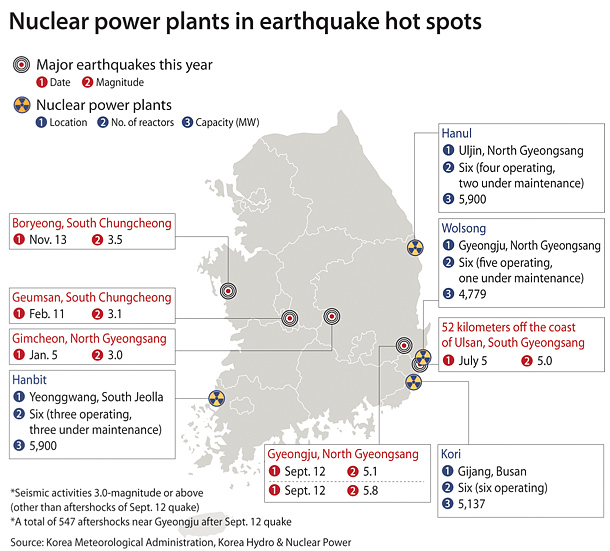 The Gyeongju earthquake in September was a wake-up call for many Koreans. Now as a part of a nationwide initiative to prepare for future seismic activities, nuclear power plants in Korea will bolster their structures to withstand earthquakes stronger than those in September, the Ministry of Trade, Industry and Energy said Monday.

“We will reinforce the structure of the core facilities of our nuclear reactors by 2018 so they are capable of handling tremors over 7.0 in magnitude,” said Trade Minister Joo Hyung-hwan.

The minister’s remarks came during an energy policy meeting on Monday, during which high-ranking officials and panels in energy industry discussed policy directions. One of the key topics was how to cope with the dangers that may arise from earthquakes.

As of Monday, 547 aftershocks have hit Gyeongju since the main shock on Sept. 12. While there were only five shocks in 2015 that were more than 3.0 in magnitude, four of which took place out on the coast, 34 earthquakes this year registered as stronger than 3.0, two of which were greater than 4.0 and three above 5.0 in magnitude.

The number of tremors in and close to Gyeongju is especially alarming due to the nearby reactors. According to Korea Hydro & Nuclear Power, six reactors capable of producing 4,779 megawatts are operating at its Wolsong plant in Gyeongju. In its Kori plant in Gijang, Busan, six that produce 5,900 megawatts are stationed while two are under construction. After the 2011 Fukushima nuclear disaster in Japan, concerns rose whether the plants in Korea have the capability to hold off stronger earthquakes that may follow.

“We believe a re-evaluation of the safety of nuclear plant sites is necessary,” said an official from the trade ministry. “Tomographic examination [in Gyeongju] is already well under way. With recent seismic activities, we could have more data at our disposal that will come in handy.”

“Depending on the result of the re-evaluation, we can figure out how to further bolster the current plants as well as use as reference for future construction,” the official added.

The attendees at the meeting also called on the government to raise awareness of nuclear power safety and guidelines in case of an emergency.

“The awareness of the citizens is an important variable in nuclear power safety,” said Kim Myung-ja, chair of Korea Business Council for Sustainable Development and former minister of environment.