Don’t yield to the pressure

Don’t yield to the pressure 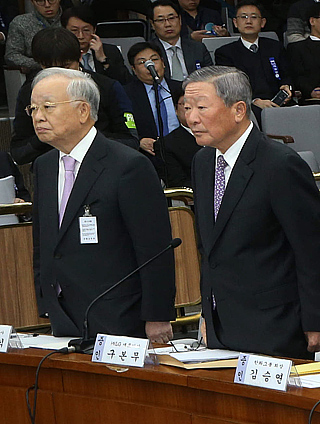 In a visit to China on April 13, 1995, Samsung Chairman Lee Kun-hee said, “Unless misdirected administrative regulations and bureaucracy are eradicated, I cannot imagine Korea leading the 21st century. Korea’s economy is second class, bureaucrats are third class and politics is fourth class.” His “Beijing remark” stirred Korean society. The Kim Young-sam administration was offended. But many people agreed with Lee.

More than 20 years have passed, but Korean politics is still fourth class. As the National Assembly voted to impeach Park Geun-hye on Dec. 9, the authority of the president has been suspended, the second case in Korean history. The president is accused of leaking confidential documents to a private citizen and abusing her authority to raise funds from companies. Amid the turmoil of impeachment, politicians seem lost. They are focused on political strife rather than offering vision. They are repeating the same things that happened under authoritarian, dictatorial periods.

Meanwhile, Korean companies have been fiercely competing against world-class companies and have made their way up to first class. In July, Nihon Keizai Shimbun researched market dominance of 55 items worldwide as of 2015, and eight Korean products were ranked on the first level. Korea shared third place with China, compared to America’s 18 and Japan’s 11. Through competition, Korean companies have improved to meet global standards.

But Dec. 6 was a day of shame for Korean businesses. In the National Assembly hearing on the Choi Soon-sil’s involvement in state affairs, nine conglomerate chiefs, including Samsung Electronics vice chairman Lee Jae-yong and Hyundai Motor Chairman Chung Mong-ku, were called. They were questioned on the coercive nature of the Mi-R and K-Sports foundations’ fundraising.

On their surrendering to unlawful pressure, they said, “When asked by the government, it is hard for a company to refuse in the Korean reality” and “Companies have to follow the government’s direction.” Their arguments are the same as what Hyundai Chairman Chung Ju-young said 28 years ago in the hearing on the Fifth Republic’s Ilhae Foundation. Chung said, “I was asked, and I thought I had to give money to live comfortably.”

While Korean companies’ competitiveness is near first-class, their response to politics remains outdated. Industries claimed that they could not refuse the demand of the powerful, but their excuses are seen as back-scratching between politicians and businessmen. There is no case in history that a company maintains the world’s top position through political collusion. If they want to become the world’s best, they must be able to say no to unjust demands. We cannot let our future generation inherit the shameful legacy as demonstrated in the Inhae Foundation and Mi-R and K Sports Foundation hearings.


*The author is the editor of economic and industrial news at the Korea JoongAng Daily.