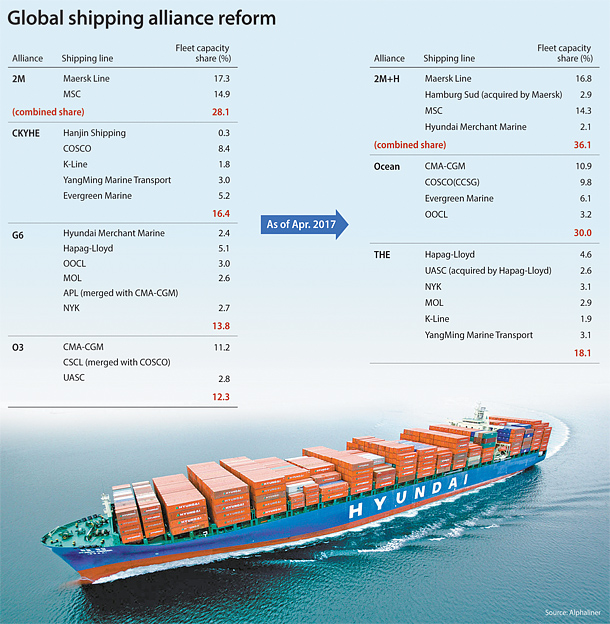 Hyundai Merchant Marine, the nation’s sole surviving global shipping line, announced a tie-up with the world’s largest shipping network dubbed 2M, though the deal falls short of the full alliance that was expected.

HMM entered into a strategic partnership with the alliance consisting of Danish Maersk Line and Switzerland-based Mediterranean Shipping Company (MSC), the two largest shippers in the world, a long-awaited cooperative that could speed up the company’s business normalization, the company said Sunday. However, HMM failed to gain official membership into the alliance.

While the so-called 2M+H strategic cooperation will provide HMM access to 2M’s shipping network, the cooperation is “outside the scope of MSC and Maersk Line’s 2M vessel sharing agreement,” Maersk said in a statement.

Rather than vessel sharing, the cooperation between the three will be limited to slot exchanges and slot purchases as well as Maersk Line and MSC taking over a number of charters and operations of vessels from HMM.

In a bid to rebut concerns regarding its failure to join and prove profitability of the cooperation, HMM held a press briefing Monday at its headquarters in central Seoul.

“We understand some assess the cooperation to be short of expectations,” said Yoo Chang-keun, CEO of HMM. “However, in our point of view, it was the best outcome considering the current situation of HMM.”

Lee Sang-sik, head of the company’s container planning division, said the cooperation “is similar to an alliance considering the range and exclusivity of the partnership.”

Lee, who participated in signing the deal, cited three reasons the recent deal amounts to an alliance: the cooperation is exclusive to the three parties, the cooperation must be filed with the U.S. Federal Maritime Commission and there are other alliances that do not include vessel sharing.

The joint partnership, which takes effect in April, will grant HMM economies of scale as well as business efficiency in trans-Pacific and Asia-Europe routes, Lee said.

“There have been media reports calling the cooperation only a half-fledged membership, but I don’t think it should be appraised on whether or not [HMM] is an official member,” said Jeong Yong-seok, vice governor of restructuring at Korea Development Bank (KDB), HMM’s main creditor.

“Though vessel sharing is not included, the deal is expected to boost the profitability of HMM’s businesses on major routes and KDB will continue to back HMM on its path to normalization, including financial support.”

While an alliance usually refers to the sharing of shipping networks or vessel space through joint operation of routes, slot exchange or purchase agreements means HMM can either share or buy out slots of Maersk and MSC’s vessels to load cargo.

“We are pleased to enter into this strategic cooperation with Korea’s leading container carrier” said Soren Toft, chief operating officer of Maersk. “It will enable us to enhance our 2M network and presence in the important trans-Pacific trade.”

During the briefing, HMM also revealed its mid- to long-term strategy. Rather than expanding its size or business, it will focus on trans-Pacific route operations to ramp up its competitiveness in the overall U.S. market to ultimately achieve a 5 percent global market share and 5 percent operating profit to sales ratio by 2021.

In the late 2000s, when HMM was a healthy business, it accounted for 3.1 percent of the global shipping market, ranking 16th among shippers worldwide. Operating losses snowballed over the last six years under price wars and overcapacity in the industry. At the end of last year, its debt-to-equity ratio had surpassed 2,000 percent.