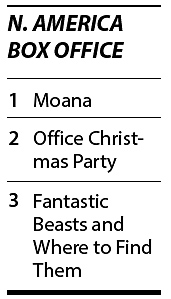 LOS ANGELES - Disney’s “Moana” has continued to sit pretty atop the box office for its third consecutive weekend, but Damien Chazelle’s musical “La La Land” was what really had audiences singing this weekend.

Playing in only five theaters, the lively and well-reviewed “La La Land” grossed a staggering $855,000 for Lionsgate, according to studio estimates Sunday. Its $171,000 per theater average is an all-time high for a five-theater release and for 2016 in general.

According to exit polls, 52 percent of audiences were female and 53 percent were over age 30.

“We felt like we were going to have a strong opening, but I don’t think anyone would have predicted a result this big,” said David Spitz, Lionsgate’s president of domestic theatrical distribution.

The film cost a reported $30 million to make and has been gaining buzz throughout the fall since it premiered at the Venice Film Festival and continued wowing critics and audiences at various other festivals. “La La Land” expands to 200 locations next week.

“This is the hottest ticket in town, and now people want to be able to talk about the movie. The availability is quite limited, but that will result in a crescendo,” he said. “This is a movie that is tailor made for that platform release... (it) is a real breath of fresh air, and I think it’s going to take off for many reasons.”

It was mostly business as usual among wide releases, with “Moana” in first with $18.8 million, followed by the Jennifer Aniston comedy “Office Christmas Party,” which debuted to $17.5 million.

The rest of the top five looked similar to the past few weeks, with “Fantastic Beasts and Where to Find Them” in third with $10.8 million, bringing its domestic grosses to $199.3 million. The Amy Adams and Jeremy Renner sci-fi pic “Arrival” held on in fourth with $5.6 million, while Marvel’s “Doctor Strange” took fifth place.