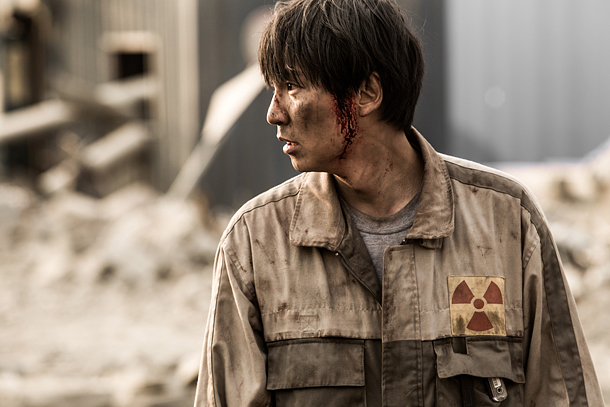 Featuring actor Kim Nam-gil and actress Moon Jeong-hee, the disaster movie, which touches on the danger of nuclear power plants, earned 9.3 billion won ($8.08 million) through 1.12 million tickets, accounting for 45.5 percent of the weekend sales. Since its release at 1,166 screens on Wednesday, the film has so far sold 1.46 million tickets, raking in a total of 11.79 billion won.

The beautifully crafted “La La Land” came in second, selling 427,000 tickets and grossing 3.82 billion won from Friday to Sunday. Starring Emma Stone and Ryan Gosling, it depicts the romance between two struggling dreamers through music and choreography reminiscent of Hollywood’s musical heyday in the 1950s. Also released on Wednesday, the film has so far sold 563,000 tickets.

Local comedy “My Annoying Brother” managed to come in third by selling 264,000 tickets in its third weekend. Revolving around the brotherhood of a fallen national judo player that lost his sight and his fraudulent step brother, the comedy has so far garnered the hearts of 2.68 million moviegoers. 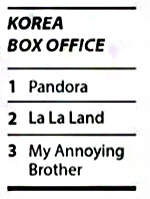 The animated “Storks,” produced by Warner Animation Group, grabbed the fourth spot in its debut weekend. The family comedy about reviving a baby delivering business sold 147,000 tickets, adding up to a total of 166,000 admissions.

The Harry Potter spinoff “Fantastic Beasts and Where to Find Them” rounded up the top five in its fourth weekend with 146,000 tickets. Despite being written by the world-renowned novelist J.K. Rowling, the box office performance of the newly extended magical world has been meager. So far, 4.47 million moviegoers have chosen to see this film.