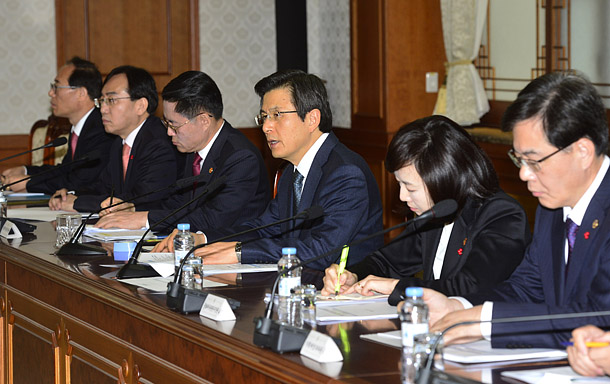 Prime Minister Hwang Kyo-ahn, third from right, now acting president, presides over a meeting of ministers responsible for containing the spread of avian influenza at the main conference room in the Central Government Complex in central Seoul on Monday. [JOINT PRESS COPRS]

Due to the gravity of national security matters, Hwang had the senior secretary for national security and foreign affairs, Kim Kyou-hyun, report to him after an impeachment motion passed in the National Assembly Friday.

Hwang decided to retain Deputy Prime Minister Yoo Il-ho, who doubles as finance minister, indicating that he would retain the economic policies of the Park administration rather than seek major changes.

Yoo had been in an awkward position after President Park tapped Yim Jong-yong, head of the Financial Services Commission (FSC), to succeed him last month. Yim’s appointment got stuck in limbo as an influence-peddling scandal paralyzed Park’s government and eventually led to her impeachment.

The opposition bloc initially demanded Yoo, a former Saenuri lawmaker, resign from his post as he represents the bedrock of President Park’s economic policies. But the Minjoo Party of Korea, the largest opposition party, signaled a shift Monday when its chief Choo Mi-ae said the opposition has no authority over cabinet appointments, a remark understood as her tacit consent to keeping Yoo, a former professor.

“Taking into account the current instability in state affairs, we will not demand the replacement of the finance minister with Yim Jong-yong as of now,” said Minjoo spokesman Yoon Kwan-suk, who noted there had been disagreements among party members on whether Yoo should step down.

The Minjoo’s agreement to let Yoo continue his economic polices may have reflected its concerns that Hwang might also try to wield his power to select a successor to Constitutional Court chief Justice Park Han-chul, whose term ends on Jan. 31, and justice Lee Jung-mi, who steps down on March 13.

In a bid to ensure stability in state affairs, Hwang will visit the National Assembly to meet with Assembly Speaker Chung Sye-kyun Wednesday. Hwang requested the meeting, according to a parliamentary official who asked not to be named. At the meeting, acting president Hwang is expected to ask for parliamentary cooperation in managing state affairs.

With acting president Hwang accelerating his efforts to take the charge, the ruling Saenuri Party and the three opposition parties reached an agreement Monday to form a consultative body involving the government and the four parties to steer national affairs. The parties also agreed to set up a special parliamentary committee for constitutional amendments presided over by a Saenuri lawmaker.

Details on the consultative body are to be determined at upcoming meetings attended by party officials and senior government officials, including deputy prime minster Yoo.

But while the parties agreed to begin talks for forming the joint policy body, Saenuri floor leader Chung Jin-suk expressed his intention to step down from his post Monday, along with other senior Saenuri members who are supposed to take part in discussions on forming the consultative body.

While Chung will retain his title until the party has a new floor leader, his intention to step down left the Minjoo leadership confounded as they now will have to negotiate with outgoing Saenuri officials on forming the consultative body.

“This is absurd that he did this right after reaching an agreement. It is a blatant display of political irresponsibility,” criticized Minjoo floor leader Woo Sang-ho.