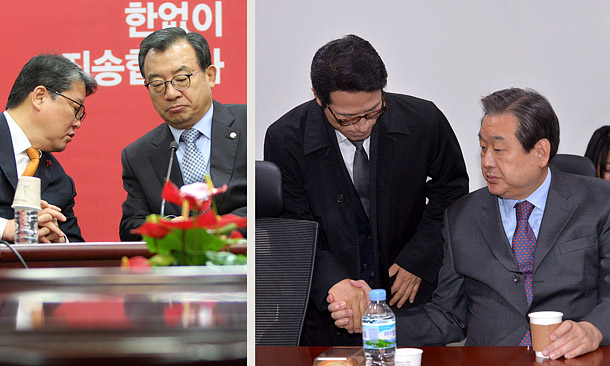 An acute internal rift among ruling Saenuri members erupted Monday with members of the pro-Park Geun-hye faction criticizing lawmakers who voted to impeach the president, calling them “subhuman” and demanding they leave the party.

In return, the so-called Park adversaries said it was the Park faction who drove the party into a ditch and they should leave.

Rep. Lee Jang-woo lashed out at former party chairman Kim Moo-sung and former floor leader Yoo Seong-min for having led the yes vote movement to impeach the president, calling them opportunistic betrayers. Lee called the behavior of Kim and Yoo “subhuman” and “shameless.”

“I know their secret calculations for impeaching the president,” said the two-term lawmaker during a party leadership meeting on Monday at the party headquarters, “They represent a political culture in which a politician betrays the party by voting for impeachment for the sake of one’s own interest … The Saenuri should not have them as its own members.”

The harsh words came along with rising speculation that the Saenuri leadership, comprised of pro-Park members, would soon hand over its power to a party emergency committee in the aftermath of Park’s impeachment and growing demands from Park adversaries for their resignation.

To demonstrate their resolve to keep control of the party, 51 Saenuri lawmakers aligned with the pro-Park faction announced Monday that they launched a political body called the Conservative Association for Unity and Innovation to counter growing influence by another organization comprised of party lawmakers outside the pro-Park faction.

Park adversaries said the figures who allowed presidential friend Choi Soon-sil to pull strings in state affairs were the ones who had to quit the party.

Rep. Hwang Young-cheul, who represents a faction of 39 members that supported impeachment, singled out eight party lawmakers at the center of the pro-Park faction and demanded they leave the party.

Last Friday’s vote was by secret ballot so it’s not known how ruling party members voted or how many supported impeachment.

Assuming all 172 opposition and independents cast yes votes for impeachment Friday, 62 out of 128 Saenuri members voted to impeach the president to bring the yes vote to 234 votes.

The other 66 Saenuri lawmakers must have opposed impeachment - a vote that totaled 56 - abstained or cast votes that were invalid. Rep. Choi Kyung-hwan, a core pro-Park member, didn’t even participate in the vote.

While the Friday vote appears to show an even split between those voting for impeachment and those who voted against, which group gains control of the party has yet to be determined. The Saenuri Party has 56.4 billion won ($48.2 million) in total assets including real estate.