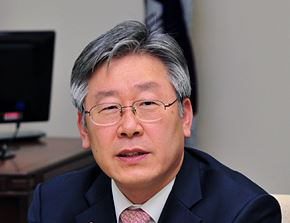 Seongnam Mayor Lee Jae-myung, whose popularity has spiked in recent weeks following his blunt calls for President Park Geun-hye to resign, apologized to students and staff at Gachon University on Monday after his contemptuous comment on the university went viral.

During a lecture in Busan last month, Lee is reported to have called Gachon University insignificant.

“I graduated from Chung-Ang University and I passed the bar exam, so why would I need a graduate diploma from a university whose name is not well known?” Lee said in a recorded video of his lecture provided by MediaWatch.

Lee has been accused of plagiarizing his masters thesis at the university in 2005. The allegation arose in 2013 when a civic group requested the university to investigate.

“I apologize to the university students, graduates and staff,” Lee said on his Facebook account on Monday.

“I said at the lecture that I returned my diploma after the controversy arose because I didn’t need a diploma from a university whose name is not well known,” Lee said.

“Yet someone twisted my words to say that I called the university a nameless one.”

“Regardless,” he added, “I have failed to exercise deliberation in my comment, and I apologize to the students, graduates and staff at the university.”

The Gachon University crowd were less than mollified.

“Excuse me Mayor Lee, isn’t Gachon University located in your city?” read a post on the community’s Facebook page. “Did you just call a university in your district a nameless one?”

“I used to think highly of you, Mayor Lee,” read another post on the page, “especially after your popularity rose so high you became the No. 2 among presidential contenders.

“Even when some adults didn’t seem to know much about my university, I told myself that as long as I try hard at this university, all will be well,” read the post. “But hearing those words from the mouth of the mayor of Seongnam makes us all feel insignificant.”

Gachon University announced Monday that Lee’s diploma is still valid because a five-year statute of limitations on irregularities passed.