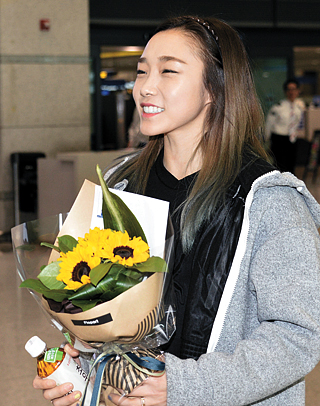 The “Queen of Climbing,” Kim Ja-in, the world’s No. 3 artificial-rock climber, became the first Korean female climber to successfully climb one of the most challenging natural rock walls in China.

According to Kim’s management company, All That Sports, Kim completed the 5.14b-grade China Climb natural rock climbing course on Dec. 4 on White Mountain in Yangshuo, southern China. Kim flashed the course, which means she climbed the rock face on the first trial with only the information gathered prior to the climb, becoming the first-ever Korean to do so on such a difficult course.

China Climb consists of multiple courses for beginners and experts, one of which was the 35-meter (115-foot) course Kim finished. The grade for which Kim has gotten herself the new title is 5.14b, which is considered so hard only a few professionals in the world are capable of doing it.

The Yosemite Decimal System, or YDS, starts with grade 3 for beginners and moves up to five (grades 1 and 2 involve hiking and scrambling). From 5.0 onwards, the number increases by 0.1 for each level of difficulty, and after 5.1 they increase by the letter a-d, with the highest grade being 5.15c.

On Dec. 8, Kim completed the 5.14c Spicy Noodle course twice, located just next to the one she finished on Dec. 4. Spicy Noodle is also a 35-meter course, set by Chris Sharma in 2009. The course starts with pinch holds and ends with long pipe-shaped holds. No female climber has completed it - until now.

“I topped off two 5.14 grade courses. I feel like I have been given a big present after finishing the season,” said Kim. The professional climbing diva is the 2016 champion in lead climbing, a contest in which players compete for the fastest climb up a 15-meter artificial rock wall, and the third ranking in the climbing World Cup.

Kim’s championship wasn’t easily earned - her father used to take her with him on hikes, and as a child, she was terrified of heights. But she’s come a long way since then.

The climber’s shoes are two millimeters smaller than her actual size to make it easier to squeeze with her feet. Kim also said that her fingerprints are gone because she has spent so much time grabbing holds.

In September 2014, Kim became the first Korean to win the IFSC World Agility Championships. Apart from her usual nickname, fans also refer to her as the “Climbing Ballerina,” due to her small physique of 1.53 meters and 41 kilograms (90 pounds).

In an attempt to popularize climbing, Kim once climbed an 84-meter building in the middle of Myeongdong, central Seoul, and performed dunk shots by climbing basketball posts.

“Park Se-ri pioneered the deserted land of golf and Kim Yuna did the same for figure skating,” said Kim. “I think there’s something hardcore in us Korean women. I hope that more people come to try out climbing after seeing myself enjoy the sport.”

Climbing has been selected as an official game in the 2020 Tokyo Olympics.