Son Yeon-jae voted athlete of the year in Gallup poll

Son Yeon-jae voted athlete of the year in Gallup poll 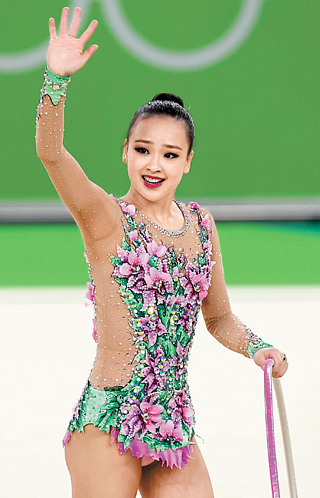 The “Fairy of Rhythmic Gymnastics,” Son Yeon-jae, a 22-year-old student at Yonsei University, was this year’s top athlete according to a recent survey.

The results of a Gallup Korea survey from Nov. 4 to 25 of 1,700 South Koreans ages 13 and up revealed Son received the highest approval rating at 29.8 percent. Although Son placed fourth at the Rio de Janeiro Summer Olympic Games in individual rhythmic gymnastics, she was highly evaluated for bringing Korea to the international level in the sport. Son placed fifth in the 2012 London Olympics and won gold in the 2014 Incheon Asian Games.

The forward for Korea’s national football team, Son Heung-min, rose to second place at 27.3 percent. Third place went to the “Golf Empress,” Park In-bee, at 16.6 percent. Last year, Park attained a career grand slam by placing first in four different major competitions, and has now added to that an Olympic gold at Rio. The “Figure-skating Queen,” Kim Yuna, was fourth at 14.5 percent. Kim retired after the 2014 Sochi Winter Olympics, but she still receives adoration as a sports star.

Gallup has announced the year’s prestigious Person of the Year rankings in various fields since 2005. This survey had a sampling error of plus or minus 2.4 percent at a confidence interval of 95 percent.