FKI at a crossroads

FKI at a crossroads 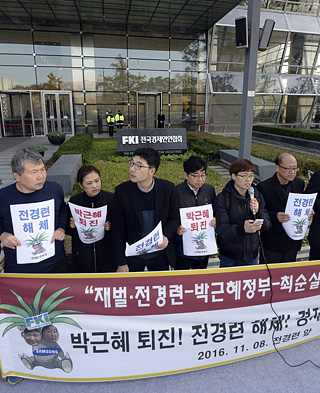 A civic group demands the Federation of Korean Industries be disbanded for its involvement in the Choi-gate scandal. [AP/NEWSIS]

He was half-joking but certainly had a point on the changing dynamics among the economic organizations. In fact, the FKI had been the leading newsmaker for decades since the Park Chung Hee administration. So reporters would name the FKI first when writing about meetings of the five organizations.

But after the 1997 Asian economic crisis, public attention to the FKI and its status in the economic world drastically declined. Kim Woo-choong, chairman of the now defunct Daewoo Group, was the last conglomerate head to lead the FKI, and other major group owners refrained from serving in its top post afterward. It was not unrelated to the decade of progressive administrations. Unlike Japan’s Keidanren, the FKI has had a hard time finding a chairman.

The FKI is at a crossroads now with its very survival at stake. If you look for the reason from the basic principles of corporate management, it boils down to its neglect of its customers. The “Charter for the Customers” that the FKI established in 1961 reads, “We realize right economic policies and encourage globalization of the economy for the attainment of a free market economy and development of a healthy national economy.” When its main customers should be businesses and people, it catered instead to a handful of powerful customers in the Blue House and in politics and ended up on the verge of dissolution.

Corporate tycoons appeared at a National Assembly hearing and declared they would no longer pay their dues to the FKI. That is like key customers announcing they will no longer buy a product called the FKI. Major public institutions and financial firms joined the boycott. The FKI was not even in attendance at an economic planning meeting held immediately after the impeachment of President Park Geun-hye was passed in the National Assembly. In retrospect, the FKI did not make the “popular products” list in the early 2000s as they failed to meet the improved standards of major customers like Samsung, Hyundai, SK and LG.

The plan to reinvent the FKI as a think tank like the Heritage Foundation in the United States may be a short-sighted idea that fails to read the tendency of the customers. Former high-level officials knowledgeable about the FKI are generally skeptical of such a makeover. At the very least, that vision cannot be attained in the near future. The Heritage Foundation is a hall of conservative ideas operated with donations from more than 1 million supporters compared to the FKI with its 600 members.

Dr. Lee Byung-wook, a former FKI executive who worked at the Heritage Foundation, said that Korea has a very thin layer of unspecified individuals and corporate donors who are willing to support a certain ideology and advocate activities like the Heritage Foundation. Also, the FKI brand has already been tainted by connection with the so-called Choi-gate scanadal so it won’t appeal to the public. With its existing, crude neo-liberalist ideology backed by a few conglomerates or tycoons, the federation could hardly become anything like Western think tanks, which are based on openness, transparency and fairness.

The latest survey of more than 50 CEOs, scholars and lawmakers found that the FKI must choose between complete reform and dissolution. Before talking about becoming a think tank, it must address the proxy controversy between its members and Vice Chairman-Secretariats. It is ironic that the FKI, the stronghold of conglomerate owners, is troubled with the reputation of being a Blue House proxy.

But the answer is clear if it looks at what its customers want. Otherwise, they may end up being weeded out of the market by the so-called invisible hand. People already say there are too many economic organizations in this country.