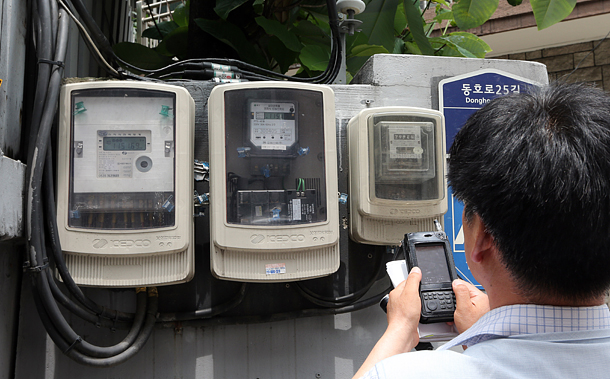 The government finalized a new household electricity billing system that will lower the average bill by 11.6 percent — and cut bills in half for some heavy users. It goes into effect with this month’s power bills.

The Ministry of Trade, Industry and Energy submitted three alternate sets of revisions to the National Assembly and lawmakers approved the third proposal, which reduces the number of electricity usage levels from six to three and the difference between the starting rate and the highest rate from 1,110.7 percent to 300 percent.

This is the first time in 12 years the government revised the progressive billing system, which became a major issue this summer after a major heat wave led to monster power bills.

“We have reviewed changes in consumption and the number of household members and came up with the new billing system,” said Shin Yong-min, a director at the Trade Ministry. “No households will experience more financial burden from the new system and I believe they will save 11.6 percent on average and as high as 14.9 percent during summer and winter.”

Currently there are six levels. Korean households pay 60.7 won (5 cents) per kilowatt of electricity for the first 100 kilowatts in a month. The price goes up to 125.9 won for the next 100 kilowatts per month and as high as 709.5 won per kilowatt — or 1,110.7 percent more than the starting price — in the highest range.

According to the Trade Ministry, the government plans to give 10 percent discounts to households that use 20 percent less energy when compared to their average consumption of the past two years. It will give 15 percent off for such households during summer and winter.
For those who consume more than 1,000 kilowatts per month, the government will charge 709.5 won per kilowatt during summers and winters, which is some 77 percent higher than the highest rate in the old system.

The government also announced that it plans to give more financial benefits to people in lower income groups and socially disadvantaged groups, such as the disabled and large families.

The government currently gives 8,000 won monthly discounts to low-income groups, which will be doubled to 16,000 won. During summers, the ministry said it will give 20,000 won discounts.

Families with a large number of members, or more than three children, will enjoy 30 percent discounts on their electricity bills, up from 20 percent.

On top of household electricity bills, the Trade Ministry announced that it will give cuts in power rates for schools. The ministry said it will give 20 percent cuts for elementary schools, middle schools and high schools.

“We will give 50 percent discounts to them during summers and winters, which is higher than the current 15 percent,” said Shin.

As the new plan will lower power bills by 11.6 percent, on average, the government estimated that the Korea Electric Power Corporation, the sole power distributor, will see a drop of 939.3 billion won in its annual sales.