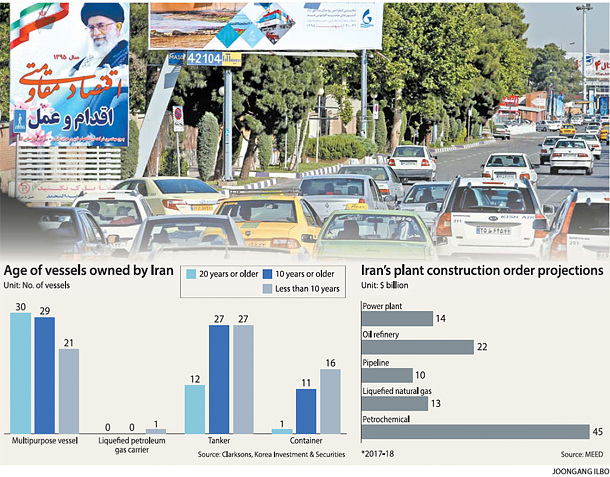 A signboard that reads “Let’s revive the economy” hangs in Tehran in May, when President Park Geun-hye made a state visit. [JOONGANG ILBO]

Shipbuilders vying to land more projects amid a global drought in demand are eyeing countries in the Middle East, attracted by eased sanctions against Iran and signs of international oil price recoveries.

Infrastructure construction had been suspended in Iran for 30 years until sanctions were lifted in January.

Currently, Iran owns 175 ships. Among them, 43 are more than 20 years old and 110 are more than 10 years old, according to shipping research company Clarksons. Replacement orders for ships older than 20 years alone could result in orders of container and bulk carriers worth more than a trillion won. “Ultimately, an annual average of a trillion [$860 million] to three trillion won worth of shipbuilding orders are expected until 2020,” said Lee Kyung-ja, a research fellow at Korea Investment & Securities.

Daewoo Shipbuilding & Marine Engineering is in negotiations with an Iranian oil company to build five jackup rigs, which are buoyant and mobile offshore oil rigs. Once finalized, the order will amount to roughly 1.3 trillion won.

In September, shipbuilder Samkang M&T inked a $398.8 million deal with Iran’s state-run shipyard Iran Shipbuilding & Offshore Industries Complex. The amount is not as big, but it equals roughly two years of revenue. Samkang will supply a 1,000 ton crane and build facilities for the shipyard.

The recent decision to cut oil supplies by major oil-exporting countries is further pushing up offshore plant construction demand in the Middle East. Orders for offshore plant facilities, used to extract and store oil under the sea, have been suspended due to sluggish oil prices.

After OPEC agreed to cut oil production on Nov. 30 for the first time in eight years, industry insiders are expecting a recovery in oil prices.

Considering it normally takes about two to three years to actually open a bid, new orders are expected to be placed around 2018. As Korea’s three major shipbuilders had already been suffering from delayed offshore plant deliveries, industry insiders are also watching whether the oil price increase could revive delivery issues.

Hyundai Heavy Industries has been delaying delivery of an offshore plant facility indefinitely as oil prices hovered around $20 to $40 after signing the contract in 2013. Daewoo Shipbuilding and Marine Engineering was recently asked by U.S. drilling company Atwood Oceanic to delay delivery of two drill ships and Samsung Heavy Industries was also informed that Malaysia-based Petronas will delay the acquisition date of its FLNG facility from 2018 to 2020.

“It’s highly likely the Middle East oil-producing countries will resume orders they either delayed or had cancelled as international oil prices recover,” said Jo Sung-jin from Korea’s International Construction Information Service. “It’s a sweet rain for construction companies which have been lagging in overseas businesses.”

According to the International Construction Information Service, local construction companies signed 24 billion won in orders as of Dec. 11, falling 45 percent year on year to the lowest record since 2006.