‘There is very little possibility Trump will act irrationally.’

‘There is very little possibility Trump will act irrationally.’ 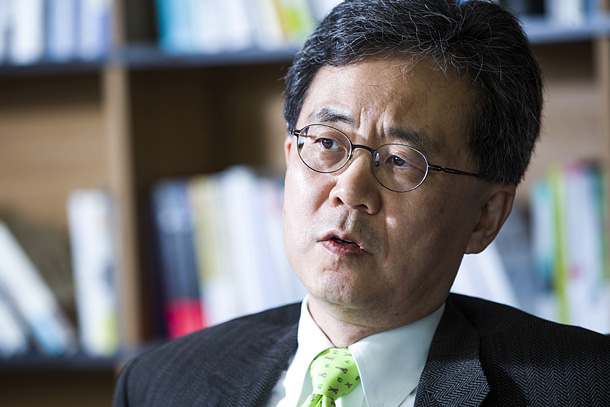 Kim Hyun-jong, former minister for trade who contributed to the conclusion of the Korea-United States Free Trade Agreement, has been attracting attention for exceptional power and confidence over the past decade.

After successfully sealing the FTA deal under the Roh Moo-hyun administration in 2007, the 57-year-old became UN ambassador and then moved on to serve as president of Samsung Electronics.

Most recently, he was elected one of the members of the World Trade Organization panel that mediates trade disputes.

Kim is now set to take over the prestigious post from Chang Seung-hwa, former professor of law at Seoul National University, whose extension of his term was aborted upon the boycotting of the United States.

After earning his bachelor’s and master’s degrees in international politics from Columbia University, he got his doctorate degree in trade law from the same school. After graduation, he worked at law firms in both Korea and the United States and served as a professor at Hongik University in Seoul.

Kim’s expertise is trade law, but his interest spreads out to various sectors. He also inherited knowledge of international politics from his father, a former diplomat, and has been studying the scenario of Donald Trump being president of the United States. The JoongAng Ilbo sat down with him on Nov. 21 and had an additional phone interview on Nov. 29.


Q. Who did you meet in the United States?

A. In the past six months, I visited Washington, D.C. from time to time to meet with Trump’s confidants as well as former and current congressmen and think-tank experts. I spent over a month staying in the United States over the past two months.


What are the main characteristics of Trump?

First, he is a typical non-mainstream negotiator who is hardly predictable. That’s why he appears to be straying when it comes to appointing key officials for his administration, even though in reality, he had everything in his mind. Second, he tends to up the stakes to an extent that no one can predict. Third, he collects his own high-quality information.


Do you think he will carry out the promises he made during the campaign?

When you look at the tone of his speech and the content, you can see his stance has completely reversed. He said during the campaign he thinks it’s okay for Korea and Japan to arm themselves with nuclear weapons, and now he is denying what he said. Not only that. He previously vowed to establish a wall on the border with Mexico, but he changed the wall into barbed wire. His thoughts seem to have changed a lot since his election.


Do you think Trump’s promises with Korea have changed, as well?

For this reason, it is highly likely that Trump will ask to amend the North American Free Trade Agreement. His next target would be the Trans-Pacific Partnership, which the Obama administration already abandoned, meaning Trump will find it hard to recover. Next would be the Korea-U.S. FTA, but I don’t think an amendment to the deal will be possible, unless Korea steps out first to re-negotiate.


Do you think the Korea-U.S. alliance will remain intact?

Michael Flynn, Trump’s new national security adviser, already called the Korea-U.S. alliance a “vital alliance.” But the hawkish members of the Trump administration will be more interested in the Islamic State of Iraq and the Levant.

Korea’s national security is directly linked to the United States. For this reason, we first need to see to what extent the United States is involved in the two ongoing issues before we can figure out how it will spend its energy on the North Korean nuclear issue.


What about the idea of Seoul taking a greater share of defense costs of the possibility of the withdrawal of the U.S. Army from Korea?

Trump has two major issues regarding Korea. First, Korea pays 900 billion won [$771 million] and the U.S. pays 1 trillion won to keep U.S. troops in Korea. Next, the United States has seen its trade deficit grow in the aftermath of the Korea-U.S. FTA and reduced jobs have dealt a blow to the country, which indicates the deal is unfair for them. But Trump has missed the weapons exports the U.S. has made. We need to emphasize that.


What will happen with North Korean nuclear possession?


What if Trump loses his temper? Won’t it be dangerous?

He looks like a president now. The move to put his daughter and son-in-law in the administration signals he is willing to be rational when it comes to public service. There is very little possibility he will act irrationally.


What made you apply for the position on the seven-member panel at the WTO?

A Korean member lost the post at the boycotting of a specific country and I just couldn’t let it happen.


Did people around you encourage you to do so?

All of them said I shouldn’t apply. There were strong competitors from Japan and Australia and I was late for the campaign. When a Korean member had already spent four years from 2012, adding me would mean eight straight years of Korean membership, raising the chance of criticism that a member from one country served for too long.


Why did you apply then?

I had this vague feeling my application would work. The post required diverse experience and I thought I was qualified for it.


What are your ambitions on the panel?

I have thus far been concentrating on being elected. Now it’s too early to comment on details about the job. But I will do my best as a Korean.