Saenuri defection to be delayed

Saenuri defection to be delayed 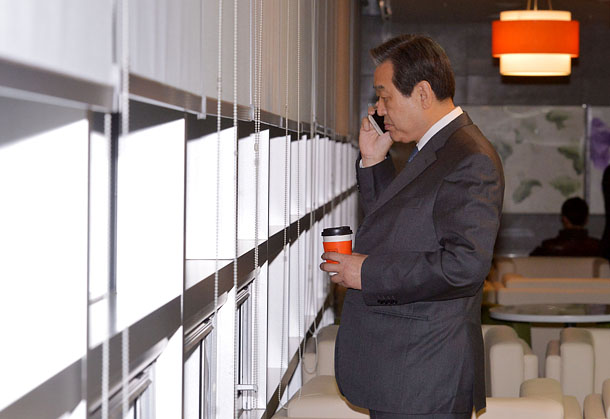 Kim Moo-sung, former chairman of the ruling Saenuri Party, prepares to attend a meeting of Park Geun-hye adversaries in the National Assembly on Tuesday. Earlier in the day, Kim said, “I am considering leaving the party to found a new conservative party.” [NEWSIS]

Saenuri lawmakers not aligned with the pro-Park Geun-hye faction indicated Tuesday they would remain in the party to participate in an upcoming election scheduled Friday for a new floor leader, putting a temporary halt to a potential mass defection by those who voted to impeach the president last Friday.

The Saenuri is set to hold an election among its party members to elect a successor to sitting floor leader, Chung Jin-suk, who expressed his intention to step down on Monday.

All eyes are on the Friday election as it has become a proxy tug of war between the two factions, each comprising from 40 to 60 members among the 128 Saenuri lawmakers.

A decision by Park adversaries to remain in the party was reflected in a remark by Rep. Yoo Seong-min, a presidential hopeful, when he said Tuesday he would strive to reform the party as much as he could before making a decision to defect.

Yoo’s comment was understood as meaning he would concentrate on electing a new floor leader outside the pro-Park faction to lead the strife-ridden party, whose current leadership is made up of Park loyalists, including party chief Lee Jung-hyun and supreme council members Lee Jang-woo and Cho Won-jin, among others.

While it appears the en masse defection by non-Park loyalists to create a new party is in limbo, harsh words between the two factions continued Tuesday with former party chief Kim Moo-sung painting those who voted against impeachment as lawmakers with a “slave mentality” and “fake conservatives.”

The former Saenuri chief did not avoid expressing his open contempt, saying, “They indiscriminately branded those who rightfully criticized President Park as betrayers and ban any form of criticism.

Their slave mentality led to the collapse of the Park government and the Saenuri,” said the veteran lawmaker, who once helped President Park’s 2007 campaign win a party nomination. President Park lost to Lee Myung-bak in the party primary.

Kim, who recently dropped his bid for president in what he described as his bid to stabilize national affairs crippled by the Choi Soon-sil scandal, also said he was considering leaving the party to create a new conservative party along with other Saenuri lawmakers who cast “yes” votes to impeach the president, noting he was listening to opinions from various sectors of society. He did not offer a specific timeline for such a move.

On rumors that Saenuri lawmakers who led the impeachment movement were reluctant to leave the party because of its vast assets worth 56.4 billion won ($48.2 million) in total, including real estate, Kim outright denied this, saying all properties held by the party should be returned to state coffers.

Then he made a bombshell revelation that the Saenuri’s assets were rooted in the extortion of conglomerates in the 1980s by the Chun Doo Hwan military government.

“We should be ashamed of ourselves that Saenuri’s buildings nationwide were financed by the extortion of major companies in the past by the Chun government,” said Kim. Saenuri, the country’s only conservative party, is a successor to the governing party during the era of the Chun military government in the 1980s.

A tug of war between the two bitter factions intensified Tuesday as the pro-Park faction launched an alliance body called the Conservative Association for Unity and Innovation with 55 Saenuri lawmakers to counter growing influence by non-Park loyalists.

Given the expected composition of each faction, it is not clear which side will triumph in the Friday contest. If the anti-Park faction produces a winner, it is possible the pro-Park faction members will defect - and vice versa.

Last Friday’s vote was by secret ballot, so it is not known how ruling party members voted or how many supported impeachment.

Assuming all 172 opposition and independents cast “yes” votes for impeachment, 62 out of 128 Saenuri members voted to impeach the president.

The other 66 Saenuri lawmakers must have opposed impeachment - a vote that totaled 56 - abstained or cast votes that were invalid. Rep. Choi Kyung-hwan, a core pro-Park member, did not even participate in the vote.