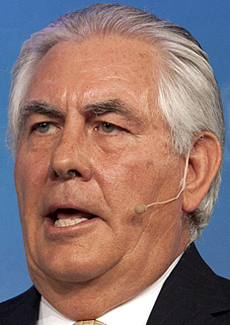 President-elect Donald J. Trump’s pick as U.S. Secretary of State, Rex Tillerson, has put the Ministry of Foreign Affairs in a crunch as one official admitted the Korean government will have to forge new links with the Exxon Mobil chief executive.

When asked if the Korean government has any ties with Tillerson, a Korean foreign affairs official on Tuesday admitted, “We will be starting from now.”

While the Korean government has said it would welcome any U.S. secretary of state, it has so far little insight into Tillerson, who would become the new American point man on the U.S.-Korea alliance, North Korea nuclear issues and other bilateral diplomatic concerns for the next four years.

“He is a figure that not only does not have any diplomatic experience but no experience as a public official,” said the Korean official. “That is why we do not see any figure that could be acquainted him even amongst our Republican contacts. We cannot discern what sort of viewpoint he has on issues that we hold important.”

Trump on Monday named the energy giant to be his secretary of state, beating out other candidates such as former New York mayor Rudolph Giuliani, former presidential hopeful Mitt Romney and U.S. Senator Bob Corker of Tennessee. This comes despite criticism of the Exxon Mobil CEO’s close ties with Moscow and Russian President Vladimir Putin.

The Korean government has been in communication with Republican assemblymen and conservative think tanks such as the Heritage Foundation to prepare for a possible Trump victory. After the real estate mogul was elected last month, Seoul officials and lawmakers scrambled to make connections with Trump’s transition team to gauge Trump’s policy direction.

But Tillerson, who would, if confirmed by the Senate, succeed Secretary of State John Kerry, falls outside the reach of any of the contacts made by Seoul officials. Tillerson was named as a potential secretary of state in the past week, adding to Seoul’s unprepared state - similar to that of other countries. Tillerson visited Korea in August 2008 as chief of Exxon and met with Lee Jae-hoon, president of Korea Polytechnic University, who was then former vice minister of knowledge economy.

“Tillerson seemed to be a very easygoing figure,” said Lee. “He probably visited Korea with a business objective but during the 30-minute talks, he didn’t mention business and treated the other side well. I got the impression that he is a person who plays in big waters as someone who has insight into the global energy market.”

Lee added, “He had grasped in great detail the position and business situation of Korea, especially its energy market. Even meeting him briefly, I got the feeling I wanted to see him again.”

Tillerson is a trustee for the Washington-based think tank Center for Strategic and International Studies, or CSIS, which has close cooperation with scholars and officials in Seoul.