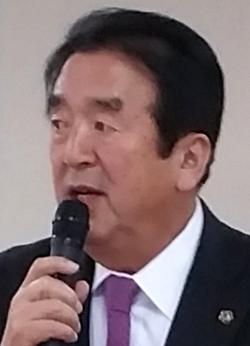 TOKYO, Japan - Oh Gong-tae, president of the Korean Residents Union in Japan, also known as Mindan, emphasized the importance of educating the next generation of Koreans in Japan to help preserve their roots.

The union of South Korean residents in Japan celebrates its 70th anniversary this year.

As he sat for an interview with a group of Korean reporters from Seoul on Dec. 7 at the Mindan’s central head office in Tokyo, Oh emphasized that Mindan prioritizes curbing hate speech against Koreans, improving grassroots efforts to advance Korea-Japan relations and improving the education of youth.

There are around 600,000 Korean residents in Japan who have not adopted Japanese nationality.

In May, the Japanese Diet passed a new law curbing hate speech against non-Japanese. Hate speech against Koreans peaked in recent years since 2013, as Seoul and Tokyo’s relations have soured over historical and territorial issues.

Oh pointed out that the new law, while not legally banning hate speech nor imposing any penalties, still has been effective in discouraging discriminatory rallies against Koreans.

“The most important thing for us are schools,” he said, “and we are in the process of pushing for more Korean schools.”

Mindan has only four Korean schools: one in Tokyo, two in Osaka and one in Kyoto. Around 2,000 students attend these four schools, of whom 60 to 70 percent hold Korean nationality.

It especially hopes to establish a new school in Tokyo, since the current one is geared more towards students expecting to return to Korea and attend college there.

The previous governor of Tokyo, Yoichi Masuzoe, initially promised a new Korean school to be established in Tokyo, but the current governor overturned this pledge.

Some 40 percent of students attending the Korean school in Tokyo are the children of embassy officials and employees in Japan who expect to return to Korea, according to Mindan. Some 30 percent of the school’s budget comes from the South Korean government, which means the Korean Ministry of Education dispatches a principal to the school, which causes some friction.

“We want to be able to select our own principal from Korea,” said Oh, who explained that if students are taught a completely Korean curriculum, it is then difficult to attend college in Japan. Furthermore, enrolling in these Korean schools are more expensive than regular public schools in Japan, so Korean-Japanese students who plan to continue living in Japan are dissuaded from attending Korean schools.

The other main organization for Koreans in Japan is Chongryon, the General Association of Korean Residents in Japan, which has close ties with Pyongyang, and about 60 schools with about 6,500 students overall, though the number is shrinking.

Mindan and Chongryon had civilian-level exchanges from the 1990s to 2006, but such projects have been halted since a reconciliation agreement fell apart on May 17, 2006.

This year alone, Mindan has sent over 1,000 students to Korea as part of its many projects. “We are trying to give them a sense of pride as Koreans by experiencing life back in Korea,” said Oh.

He said the new generation often has dual Korean and Japanese citizenship, or simply Japanese. “If we just leave them alone,” Oh said, “they will all become Japanese.”

Oh, born the same year Mindan was founded, joined the union in 1970 and said he hopes for the history of Koreans in Japan and their contributions to their motherland to be recalled in Korea’s history or social science textbooks.

During the 1988 Summer Olympic Games in Seoul, Mindan contributed 10 billion yen, an amount worth some 200 billion won now ($171 million).

Mindan estimates it has contributed some 5 trillion won to South Korea in its 70-year history.

“While we have history issues with Japan, we, the Koreans residing in Japan, hope to move beyond this and for good Korea-Japan relations to be established,” said Oh. “That is for the benefit of us Koreans who have maintained our Korean nationality despite discrimination and facing difficulties while living in Japan.”