Jobs being shed in many sectors of the economy

Jobs being shed in many sectors of the economy 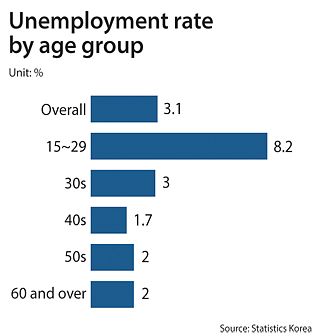 As the economy faces a 2017 full of challenges, large scale turnaround plans are being instituted in industries outside the troubled shipping and shipbuilding industries, including the financial sector, and major layoffs are going forward.

KB Kookmin Bank will accept voluntary resignations of employees who have worked at the bank for more than 10 years starting from next week. Its target is to slim down by 13,000 positions, or 63 percent of the total employees at the bank.

The voluntary resignations are part of a restructuring the bank started in 2015. Last year, the bank offered packages to employees over 45 and 20 percent of them, or 1,100 people, resigned.

This year’s figure is likely to far exceed that of the previous year.

Other finance and insurance companies, including Shinhan Bank and Woori Bank, are announcing similar plans.

The layoffs come at a time when the job market is already fragile.

According to Statistics Korea Wednesday, the overall unemployment rate in November remained the same as the previous year at 3.1 percent.

The number of Koreans working rose 339,000 year on year to record 26.6 million in November, and this was the first time in three months that the figure rose by more than 300,000. The construction and services sectors saw their numbers grow.

But the figure for manufacturing dropped 102,000 when compared to the previous year. This was the second month in a row that the number dropped by more than 100,000, and the number of employees in the manufacturing sector fell for the fifth consecutive month.

“The unemployment rate in regions where many companies are going through restructuring plans such as Ulsan and South Gyeongsang was higher compared to other regions in the country,” said Kim Ie-han, a director at the Ministry of Strategy and Finance.

The unemployment rate for Ulsan rose 1.7 percentage point year on year to 3.9 percent and the figure for South Gyeongsang remained unchanged at 2.6 percent last month.

The total number of workers fell for those who are younger than 50 years old, while there was more people in their 50s and 60s working as of November when compared to the previous year. The government said such a change was mainly due to Korea’s aging society.

The youth unemployment rate, or the rate for people ages 15 and 29, was 8.2 percent, up 0.1 percentage point compared to the previous year. 8.2 percent is the highest for the month since 2003.

The number of Koreans aged 34 and younger who found jobs overseas through a program run by the Ministry of Labor rose 65.7 percent year on year to 3,295 this year up to November. The figure rose 96 percent compared to 1,679 in 2014, which was when the government first introduced such a job hunting program, the Labor Ministry said Wednesday.

“Applicants to the program say they chose to find jobs overseas as not many local companies are hiring.”
The government warned that the labor market might weaken further due to downward risks from within the nation and abroad.

Meanwhile, the amount of unpaid wages Korean businesses owe workers continued to rise this year as many businesses experience management problems due to the anemic economy.

According to the Ministry of Employment and Labor on Wednesday, unpaid wages totalled 1.3 trillion won ($1.11 billion) this year up to the end of last month, which was up 9.7 percent compared to 1.19 trillion won in the same period last year. Korean businesses owe money to 294,000 workers.

“We expect that the amount businesses owe will continue to grow,” said Kwon Chang-joon, a director at the Labor Ministry.