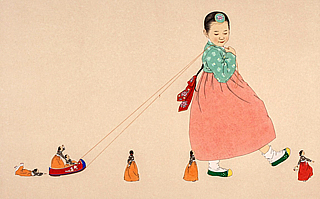 The 25 paintings have been put together for her first picture book. The book is also on view art the exhibition.

Admission is free. Go to Hangangjin station, line No. 6, exit No. 2.

To Dec. 21: The solo show features the 20 latest works of photography and video by Yoon Jin-young, 47, who cultures diverse fungi in a laboratory then takes pictures of them to capture images created from a combination of her intent and nature.

The artist said that, although mold reminds people of decay and death, mold itself is alive with various colors and textures, and therefore the coexistence of and tension between life and death fascinate her.

She was designated as one of the 2016 “Photographers of the Year” by the Ilwoo Foundation under Hanjin Group earlier this year. 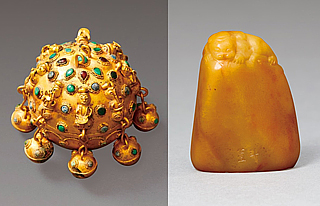 To Dec. 20: The exhibition presents 131 pieces of old Chinese art. Ranging from earthenware made in the Neolithic Period to white jade sculptures by 20th-century masters, the exhibits are a history of Chinese crafts.

Pieces on exhibit include a golden bell studded with gems (pictured) from the Western Chin Dynasty (265~316), a pair of ox-head agate cups decorated with gold from the Liao Dynasty (916~1125) and a seal made of tianhuang stone dubbed a “stone more precious than gold,” which was carved by a 20th-century master craftsman (pictured). 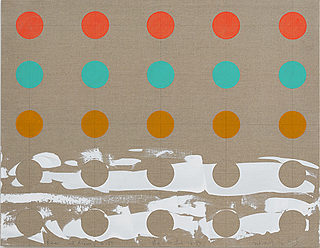 To Dec. 30: The exhibition highlights Kim Yong-ik, 69, an artist who links dansaekhwa, the mainstream Korean modern art from the late 1960s to the early 80s, and the country’s post-modern art that started in earnest in the 1990s.

The exhibition features about 30 pieces of Kim’s latest paintings, for which he said he “appropriated” his past experiments and ideas.

They are abstract paintings with colorful circles regularly arranged on the surface, which Kim started in the 1990s to mock and challenge modernist paintings.

Now with the “Apocalypse of Modernism,” which is also the title for a group of his paintings, he said these paintings have a new context.

To Feb. 26: The solo exhibition of Olafur Eliasson, one of the world’s major artists, features his 22 works of diverse media, including large-scale installations and photographic works, in which poetry and science coexist.

The highlight is the installation “Rainbow Assembly” in the museum’s Black Box. It has water falling from sprinklers installed in a circle on the ceiling. With light, the mist creates a shining white light against the darkness. If viewers go through the veil of mist and stand inside the circle, they will see rainbows shimmering and undulating around the water curtain.

Including the installations “Reversed Waterfall” and “Your Museum Primer” on view in this exhibition, Eliasson’s art in general encompasses a certain perception of nature and brings the natural world from the outdoors inside.