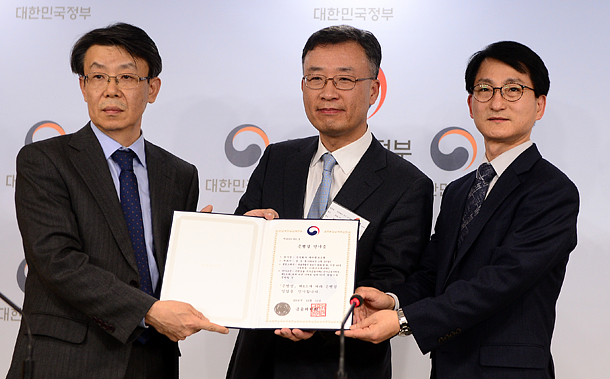 The country’s financial regulator granted final approval for an internet-only bank after months of deliberation on Wednesday, heralding a major shift in the banking industry.

With the Financial Services Commission’s rubber stamp, K bank, run by a consortium led by telecommunications provider KT, will become the country’s first authorized internet bank. The service’s launch date is set for the end of next January.

K bank’s market entry is a major change for the banking sector, which hasn’t seen a new player since 1992. The pillar of K bank’s lending services will be in loans with midrange interest rates, though the bank has yet to specify its rates.

“We will target the 10 million people whose credit rating falls between 4 and 6,” Shim Sung-hoon, CEO and president of K bank, said at a press briefing held at the Central Government Complex in Seoul. 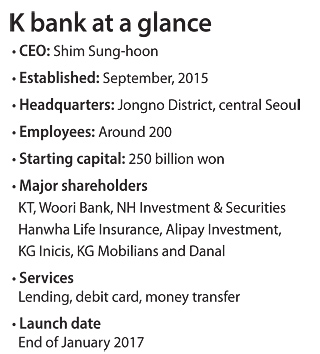 Shim added that the internet bank will secure 400 billion won ($342 million) for lending services, of which 3 to 40 percent will be provided as midrate loans.

Given that loan sharks often charge interest rates of around 30 percent and credit card loans around 15 percent, K bank may offer rates around the 10 percent level.

All K bank services, including lending, deposits and debit card issuing, will be done electronically. From what they will save in labor and overhead costs that would otherwise go to maintaining brick-and-mortar locations, Shim said K bank will be able to offer higher interest rates on deposit accounts as well as lower loan rates and reduced service fees.

To measure creditworthiness, the bank will use both traditional measures and data from KT and other partners, including retailers and small payment companies.

Even with the commission’s go-ahead, the bank still faces some regulatory hurdles. KT currently has an 8 percent stake in the consortium, but its voting rights are limited to 4 percent due to a banking law that restricts the voting rights of nonfinancial companies.

A bill aimed at expanding voting rights to 34 percent is pending in the National Assembly. “[Passage of the bill] is necessary for us to properly carry out business,” Shim said.

Unless the law passes, KT will also likely face difficulties raising new capital. The bank’s starting capital is set at 250 billion won, but Shim said the bank will need to add another 250 billion won in two to three years to run the business.

During the briefing, the CEO also distanced the bank from the massive influence-peddling scandal involving President Park Geun-hye and her confidante Choi Soon-sil. KT is suspected of receiving unfair favors thanks to its ties with the president’s close aides. “This business and approval process are not related to the scandal,” Shim said.

KT’s partners include Woori Bank, Hanwha Life Insurance and Alipay. Smaller payment providers such as KG Inicis, KG Mobilians and Danal are also in the consortium.

Another internet bank, Kakao Bank, aims to apply for final approval of its operation by the end of this year, the financial regulator said, after a consortium led by tech company Kakao received preliminary permission in September.