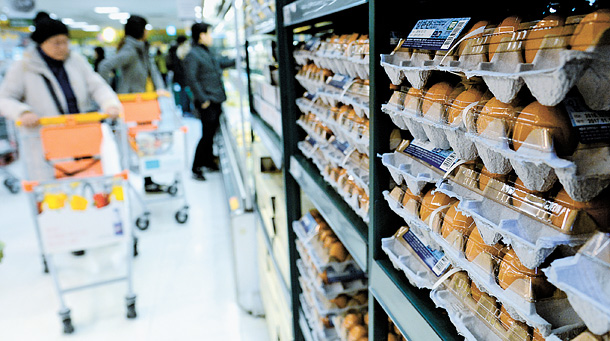 Eggs are on display at an E-Mart store in central Seoul on Wednesday. The discount retail chain said it would raise egg prices by an average 4.8 percent starting today due to a recent outbreak of avian influenza in the nation’s chicken farms. [NEWSIS]

A recent outbreak of avian influenza in the nation’s chicken farms has sent retailers scrambling to raise egg prices, which will likely lead to a price increase of other products made with the staple ingredient.

Discount retail chain E-Mart said Wednesday that it would raise egg prices today by an average 4.8 percent in 147 stores around the country - just one week after a 5 percent hike. That means a tray of 30 eggs could now go for 6,580 won ($5.63), close to 220 won an egg. “It was inevitable that we raise egg prices because producers’ prices have been constantly rising,” an E-Mart spokesman said.

Since Tuesday, producers have been charging 141.4 won an egg, a 9.5 percent increase from 128 won at the start of the month, according to the latest data from eKAPEpia, a livestock product information center run by the Ministry of Agriculture, Food and Rural Affairs.

With the egg supply shrinking, other retail chains like Homeplus and Lotte Mart are expected to follow E-Mart’s lead. Retailers say they are currently receiving only 60 to 70 percent of the supply volume they usually did before the bird flu outbreak.

Egg production was already down in the summer after a record heat wave killed up to four million laying hens vulnerable to high temperatures. Then the flu outbreak that began earlier last month led to the slaughtering of an estimated 7.5 million chickens.

The number of hens now totals 63.5 million, down 15 percent from the 75 million that was maintained through July. More could be culled if the flu situation worsens.

As a result, supermarket chains have limited their egg purchases. On Dec. 8, E-Mart Traders, the warehouse cousin of E-Mart where overall prices are cheaper by 15 percent or more, began restricting the amount of eggs a customer could purchase to a tray of 30 at 11 branches.

Bakeries, where eggs are an indispensable ingredient, might have to raise prices as well. Paris Baguette, a bakery chain run by top confectionery SPC Group, already increased prices by an average 6.6 percent on Dec. 2, their first hike since January 2014. Even though egg prices continue to go up, the nation’s most popular bakery has no plans for the time being to make another price hike, a spokeswoman said.

Tous Les Jours, the country’s No. 2 bakery chain, has yet to carry out a price increase.

“Small, non-franchise bakeries, rather than large ones that rely on wholesale mass supply, might feel the squeeze of an egg price hike even more severely,” a baking industry insider said.

Although the flu outbreak has raised the price of eggs, chicken meat prices have been on the decline. At the onset of the outbreak, suppliers rushed to release hefty sums of chicken meat out of fear that demand would fizzle. Even though experts say humans cannot contract the type-A H5N1 influenza from consuming eggs and chicken, Koreans have tended to refrain from consuming chicken.

For a month since Nov. 12, 1 kilogram (2 pounds) of chicken meat nosedived 27 percent to 2,636 won, according to the eKAPEpia. That is ringing alarm bells for chicken meat suppliers like Harim and Maniker, where the price drop will deal a direct blow to their earnings. In 2014, the last time Korea suffered a bird flu outbreak, Harim’s revenue fell 7 percent year on year to 548.8 billion won.