Foreign residents talk about how to better Seoul

Foreign residents talk about how to better Seoul 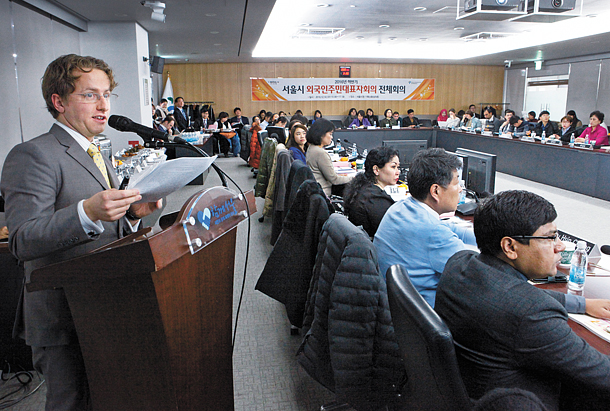 The Seoul City Foreign Residents Council gathered once more this year at City Hall to address how the city can improve for all Seoulites, proposing policy recommendations to the city government on Wednesday.

Created on Dec. 18, 2015, in celebration of the United Nation’s International Migrants Day, the committee is the first one in Korea to be affiliated with a local government and comprise only foreign residents, totaling 38 people from 23 countries. Unlike the first general meeting in July, the propositions voiced at the meeting on Wednesday concerned not only foreigners but Koreans.

“I have been in Korea for three years,” said Karolina Zasadzka from Poland, speaking in Korean, “but I still cannot get used to the terrible traffic jams and air pollution.”

“The city needs to encourage more people to bike to work or take public transportation to cope with the worsening environmental pollution,” she said. “In Europe, there is a system called Park & Ride, where people can drive their car or ride their bike to a subway or train station near their house, park their vehicles for free or at a low cost, and get on the public transportation to get into the city for work.”

She added, “And for more people to bike to work, I think the mindset of Korean people needs to be changed, because not many are very careful drivers who would stop for a person crossing the street, and most bike lanes remain blocked by parked cars.”

Zasadzka’s recommendation was supported by Sefa Filiz from Turkey.

“In the United States, there is a stop sign at every intersection and in areas near schools,” said Filiz. “And every driver must come to a complete stop at these signs before driving on.”

He added, “In Sweden, even if pedestrians don’t wave the cars to a stop, drivers stop when they see someone crossing. In Australia, a pedestrian’s safety is always first. Yet in Korea, you see roads that are so narrow and squeezed between parked cars, you have to look around anxiously before crossing and you can never tell if the driver is going to stop or not.”

Filiz recommended the Seoul city government to implement stricter traffic regulations that are more pedestrian-friendly and help authorities raise fines so that more drivers will be encouraged to drive safely. Measures to help female immigrants were also proposed at the meeting.

Won Ok-kum, a 41-year-old from Vietnam who became a naturalized Korean citizen in 1998, asked the Dasan Call Center to extend their foreign-language service to beyond 7 p.m. so that more female immigrants could gain access to the city government’s program, which provides volunteers who walk people home late at night.

“It would also be nice for the city government to scout more foreign immigrants to work as volunteers in the program,” Won said. “It would help so many female immigrants and make Seoul a truly foreigner-friendly city.”

“Many marriage immigrants in Korea tend to be female foreigners,” said Ha Sung-do, an 8-year resident of Seoul from China. “Instead of hiring them for simple work at restaurants, they can become cultural ambassadors for the restaurants and provide explanations for menus and products in their own languages to visitors from their home countries.”

He added, “Hiring more immigrants at stores is not something the city government can push forward in a one-sided manner, but it can help by issuing signs that would hang at the door of restaurants or stores that indicate services there are provided in a certain language.”

The recommendations include listing in 11 languages information on fire safety and disaster prevention guidelines on a Seoul city government’s website called Hanultari, and providing support and space at the Seoul Global Center for language classes for multiethnic children to learn the mother tongue of their foreign parents. But the original request from the council to the city government to create government-funded language classes was not implemented.