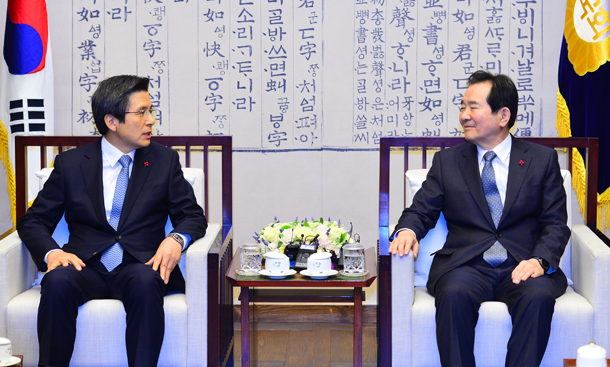 Prime Minister Hwang Kyo-ahn, left, who is also acting president, makes a courtesy call to National Assembly Speaker Chung Sye-kyun in the National Assembly in Yeouido, western Seoul, on Wednesday to seek cooperation from the legislature to manage state affairs.[NEWSIS]

“I will work towards humbly and solemnly upholding the will of the people and reflecting it in large on state affairs,” said Hwang during the meeting with Chung at the National Assembly in Yeouido, western Seoul.

“In this process, I will work towards ensuring sufficient communication with lawmakers, who represent the people, and the Assembly speaker.

“It is difficult to carry on such a heavy responsibility in these grave and difficult times,” continued Hwang. “I will work towards the stability of state affairs through close consultation with the National Assembly.”

This marks Hwang’s first meeting with the speaker since he assumed the role of acting head of state, following President Park Geun-hye’s impeachment last Friday amid an influence-peddling scandal that has paralyzed the government.

The opposition has been attempting to rein in Hwang’s role as the interim head of state, considering him an avatar of Park and her policies.

Chung replied to Hwang that a consultative group comprising ruling and opposition parties as well as the government has proposed a plan to save people’s livelihood and the economy, but Hwang avoided a direct reply. Despite his visit to the National Assembly, Hwang denied a request by opposition parties to appear at a governmental hearing at a provisional parliamentary session scheduled for Dec. 20 and 21.

“We accepted the Hwang Kyo-ahn administration not because our hearts were in it but for the stability of the nation,” said Woo Sang-ho, the main opposition Minjoo Party of Korea’s floor leader.

“The government hearing is supposed to last four days but we decreased it to two days to give a pass, but what sort of nonsense is it that [Hwang] will not appear?”

He continued, “This is not something the opposition unilaterally demanded and the Saenuri Party floor leader, Chung Jin-suk, signed off on it. This was agreed on by both ruling and opposition parties. We requested to convey that we cannot just unilaterally let it pass.”

Rep. Chung resigned Monday to take responsibility for Park’s impeachment. An election for his successor is scheduled for Friday.

“While it is said there is no precedent for an acting president to appear at a National Assembly government hearing,” Park said, “I said he has to appear and that it would be good to use the opportunity to alleviate people’s concerns and concentrate on improving the livelihood of the people.”

“A Hwang Kyo-ahn government is a transitional supervision system, nothing more, nothing less,” said Minjoo chairwoman Choo Mi-ae during a supreme council meeting of her party.

“It is a big problem if he acts like he has been waiting for the impeachment motion and acts like the president, pushing for Park Geun-hye policies or unilaterally deciding to retain the deputy prime minister for the economy.”