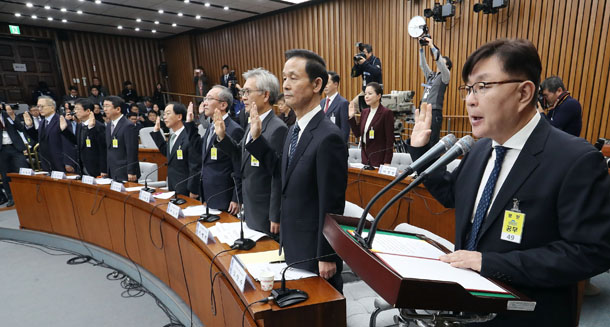 Dr. Kim Young-jae, right, is sworn in at the National Assembly’s hearing into the Choi Soon-sil scandal. The Special Investigation Committee looked into President Park Geun-hye’s actions during the sinking of the Sewol ferry on April 16, 2014. Kim Jang-soo, second from right, who headed the National Security Council in 2014, and former presidential doctors attended the session. [JOINT PRESS CORPS]

President Park Geun-hye secretly invited doctors from outside clinics to treat her at the Blue House, witnesses at a National Assembly hearing said Wednesday.

The National Assembly resumed its special investigation of the abuse of power scandal that led to last week’s impeachment of Park Wednesday and focused on her alleged nonfeasance during the sinking of the Sewol ferry on April 16, 2014, in which 304 passengers died after a delayed government response.

There has been much speculation over where Park was and what she did during the crucial hours of the rescue operation. The press has dubbed it the “seven-hour mystery.”

Suspicions were raised that Park might have been having some form of cosmetic procedure arranged by her the friend at the center of the abuse of power scandal, Choi Soon-sil.

Ruling and opposition lawmakers selected 16 witnesses for Wednesday’s hearing. Most were medical professionals and Blue House aides who assisted Park at the time of the ferry tragedy.

Dr. Kim Young-jae, a plastic surgeon whose regular patients include Choi, attended the hearing along with former and current doctors appointed by the Blue House to treat the president. Kim Jang-soo, who headed the National Security Council at the time of Sewol’s sinking, also testified before the lawmakers. Kim is now ambassador to China.

Outside doctors admitted Wednesday that they made secret visits to the Blue House to treat Park, sidestepping the official presidential medical system, but denied performing any operation on the day of the Sewol’s sinking.

Dr. Kim, a plastic surgeon who treated Choi 136 times, testified that he visited the Blue House several times as a “security guest” and treated the president. He said he made several evening visits to the Blue House since February 2014. A “security guest” is a code-word used by the Presidential Security Service to refer to a secret visitor to the president. The guest does not go through an official security check to enter the Blue House, and no record is kept of the visit.

“I made my first visit after receiving a call that she had a spasm on the scar on her face,” he said. Kim also said he visited the president with his wife because Park had some skin troubles after using cosmetic products produced by his wife’s company.

Kim, however, said he never performed any cosmetic surgeries on the president.

Another doctor, Kim Sang-man of Chaum, an anti-aging clinic on Gangnam’s affluent Cheongdam-dong, testified Wednesday that he had visited the Blue House and gave Park injections three times before he was formally appointed a presidential doctor in July 2013.

Following the doctors’ testimonies, Saenuri Rep. Hwang Young-cheul said it is a grave violation for outside doctors to secretly visit the Blue House and treat the president.

The local media reported that Park appeared to have received a cosmetic procedure around the time of the Sewol’s sinking. The Hankook Ilbo newspaper analyzed 40,000 photos by the Blue House press corps and discovered a bruise on Park’s face in photos taken during a cabinet meeting on May 13, 2014.

Quoting cosmetic surgeons and dermatologists, the newspaper said the bruise appeared to be a side-effect from injecting wrinkle fillers. Explaining that the bruise was located along the marionette line, the doctors said it is highly likely that the bruise was from an after-effect of a filler injection.

Three days later, Park invited the families of the Sewol victims to the Blue House. Photos taken from the event showed that the bruise had faded slightly.

The bruise was not evident in photos taken on May 19, 2014, when Park issued a tearful apology to the nation for the government’s poor handling of the sinking of the Sewol. Later in the afternoon, Park left for the United Arab Emirates to attend an event celebrating the installation of a made-in-Korea nuclear reactor.

“Filler injection is a popular cosmetic treatment and there is no reason to stop the president from undergoing the procedure,” the newspaper said. “But the timing, if it was done, was conspicuous because not a month had passed since the Sewol’s sinking. The nation was mourning the tragedy, and public rage over the government’s incompetence peaked. If the president received the filler injection when the families of the victims were shedding bloody tears at Paengmok Harbor, waiting for their children’s bodies to turn up, there is no viable justification.”

The newspaper also quoted medical experts as saying that filler injection is a painful process, and it is ordinary to have the patient undergo anesthesia.

Dr. Kim Young-jae said Wednesday that the bruise on Park’s face in the photos looks like an after-effect of filler injection, but said he never performed such a treatment on the president.

Captain Jo Yeo-ok, a former nursing officer of the Presidential Security Service at the time of the Sewol’s sinking, did not attend the hearing as she is receiving overseas training at a military base in San Antonio, Texas.

Yun Jeon-chu and Lee Yeong-seon, former Blue House staffers working for Park’s personal secretary’s office, also refused to attend the hearing. Rep. Kim Sung-tae, chairman of the special investigation committee, issued subpoenas in the morning to demand their appearances. Lee was accused of bringing the doctors and other “security guests,” including Choi, into the Blue House.