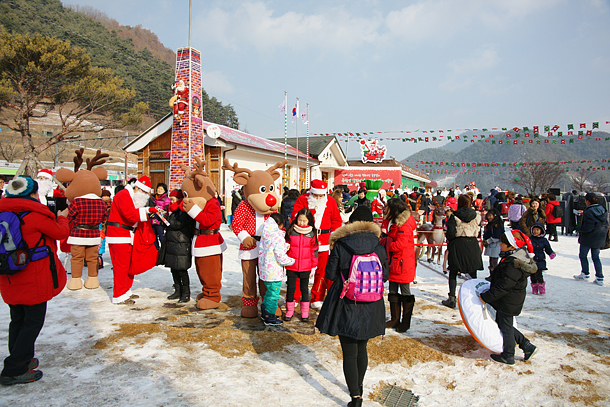 Bonghwa County in North Gyeongsang is attracting thousands of visitors after a local train station was renovated and rechristened Santa Village.

Buncheon Station in Socheon-myeon, Bonghwa County, is undeniably in the boondocks. Two years ago, the four-station Baekdu Mountain Range Valley V-train line from Cheolsam Station, Gangwon, to Buncheon Station, Gyeongsang carried very few passengers. On the average day, only 10 would get off at Buncheon.

But on Dec. 20, 2014 the station took on a new identity as Santa Village and thousands of visitors arrive daily in the winter and even during so-called summer Santa Village seasons.

Buncheon Station was remodeled into a likeness of Santa’s house. Starting from the train platform to the entrance of Santa Village, a Christmas tree, Santa Claus and snowmen were installed. Tourists enjoy snow and ice sledding, traditional games, roasting potatoes and sweet potatoes over an open fire, and donkey carriages.

Buncheon residents don Santa outfits, manage a Santa cafe, a marketplace and a farmer’s market. A specially outfitted Santa train bring the visitors to the village.

The station features a sleigh with statues of Santa and Rudolph, which people can take selfies with; a mailbox for letters to Santa; and various photo booths.

Buncheon Station’s Santa Village was a joint project by Bonghwa County and Korea Railroad Corporation (Korail). For the season, Korail has rebranded the four-station line as the Snow Train Leaving Santa Village line. It’s a 22.7 kilometer (14.1 mile) round trip from from Cheolsam Station to Buncheon Station.

The train is decked out with Rudolph and Santa Claus decorations, and its crew wears Santa costumes. On the train, passengers are encouraged to sing Christmas carols and listen to Christmas stories

Overall, there have been 330,000 visitors over the last two years. Bonghwa County is said to have experienced an economic ripple effect from the Santa village. Some 3.2 billion won ($2,744,864) was spent by visitors.

A Bonghwa County official said, “Using existing tourist infrastructure and the related programs, [we] will further strive to find marketing resources to position Buncheon Santa Village in the spotlight domestically and of course as a global destination.”