Gangneung Ice Arena is ready to go and looking good

Gangneung Ice Arena is ready to go and looking good 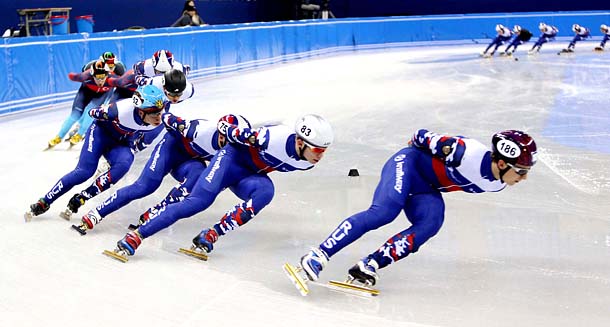 Short track skaters practice on the Gangneung Ice Arena, which opened Wednesday and will be the main venue for short track speed skating and figure skating events at the 2018 PyeongChang Winter Olympics. [NEWSIS]

The Gangneung Ice Arena opened in Gangwon on Wednesday with new improvements in safety, ensuring its readiness for the short track speed skating and figure skating events at the 2018 PyeongChang Winter Olympics.

Construction for the ice rink started in June 2014 and took two years and six months to complete. Coinciding with the grand opening, there will be an Olympic test event. Beginning from today, the fourth round of the 2016-17 International Skating Union (ISU) Short Track World Cup will begin.

The ISU Four Continents Figure Skating Championship will be held from Jan. 16 to 19. Prior to the Olympics, the configurations for the short track and figure skating events will both be optimized. The South Korean Men and Women’s Short Track Speed Skating Competition opened earlier at the Gangneung Ice Arena on Nov. 20 as a trial run.

Even before the rink opened, praise poured in, especially for the 90-centimeter (35-inch) thick pliant safety fences that protect competitors should they bump into each other or tumble while rounding a corner. These are safer than the rigid fences at Taereung Ice Rink or Mokdong Ice Rink.

Viktor Ahn, the Korean-born Russian short track gold medalist, crashed into a fence injuring his left knee while training at Taereung in 2008 and underwent a year of rehabilitation. But 10 or so athletes fell during the National Men and Women’s Short Track Speed Skating Competition at Gangneung Ice Arena and none suffered a major injury.

The cutting-edge facility is also the first Korean ice rink to maintain a temperature of 15 degrees Celsius (59 degrees Fahrenheit) in the stands.

Some athletes were even spotted wearing short-sleeved shirts at the speed skating competition. Three hundred vents warm the seats, leaving the ice untouched.

This is especially impressive considering the temperatures at which the ice must be kept. The ice must be slighter warmer - minus 4 degrees Celsius (24.8 degrees Fahrenheit) - and therefore softer for figure skating, whereas colder - minus 7 degrees Celsius (19.4 degrees Fahrenheit) - and harder ice is better suited to short track, as it enhances speed.

The challenge of going from one to the other was evident at the 2014 Sochi Olympics in Russia. During the women’s short track event at the Iceberg Skating Palace, Park Seung-hui fell twice in the 500m final.

“The surface of the ice was pock-marked everywhere,” said Park. “The ice quality wasn’t good.”

The challenge comes because, after the figure skating matches conclude, the ice must be prepared in three hours for the short track events.

“It is difficult to change the ice quality in just a few hours,” said gold medalist Ko Gi-hyun, who is now the general facilities manager at Gangneung. “The ice for racing and performance events is different. The camera positions, fences and other things must be changed.”

“To adjust the ice temperature, a day or more is necessary,” said Bae Ki-tae, technical director of ICE n SPORTS. “Unlike at Sochi, figure skating will be held in the morning with short track in the afternoon. Fortunately, it’s easier to freeze ice than to melt it.”

To do this, three 150RT (refrigeration tonnage) coolers were installed. So far, however, the facility appears to be shipshape. According to Jin Seon-yoo, 3-time gold medalist at the 2006 Torino Winter Olympics, “The stadium suits the players needs down to the finest detail.”