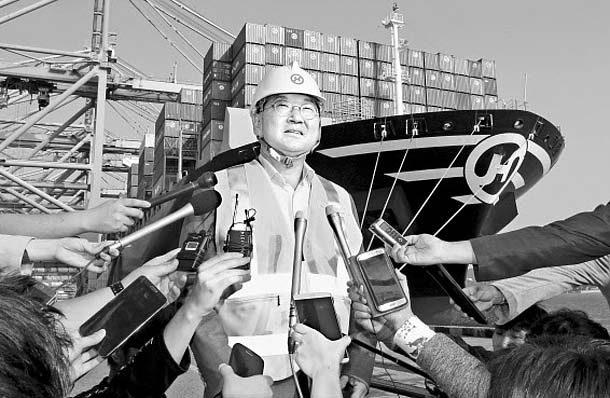 Yoo Il-ho, deputy prime minister for the economy and finance minister, held an executive meeting of the Ministry of Strategy and Finance last Saturday, a day after the National Assembly passed the motion to impeach President Park Geun-hye. The meeting was pulled forward by a day. He called for steadfastness from senior officials in times of turbulence, while stressing that “maintaining international credibility, communication, proactive budgetary expedition, and stability in public livelihood” were his priorities. He also pledged to commit himself with “historical devotion and responsibility.”

The officials were mildly surprised by the sudden burst of strong-willed sentiments from their usually timid boss whose seat was actually on the line after the president was disgraced. They had not heard such big words even when he took office earlier in the year. A few days later, Prime Minister Hwang Kyo-ahn, who became the acting president while the president awaited a Constitutional Court ruling on the impeachment, gave his vote of confidence in the incumbent finance minister, saying economic affairs should be run by Yoo.

The awkward sharing of the finance minister’s role finally came to an end. Yoo’s position had been in limbo after the president nominated Financial Services Commission Chairman Yim Jong-yong as his replacement about 40 days ago. But since the opposition favored Yoo over Yim, Yoo is expected to command economic affairs for the next six to eight months if the president’s term is cut short by the court ruling and a new administration is organized after an election.

Yoo must be relieved. But we cannot know how the economy will fare. It is a relief that the economic command system is finally in order.

But there are more reasons for concerns. The economy is mired in deeply troubled waters. It faces unprecedented challenges on the domestic and external fronts on top of power transitions at home and in the United States. Strong leadership is demanded more than at any other time.

Yoo has not demonstrated such leadership over the last year. The finance ministry hardly felt his presence. “It’s business as usual. It would make no difference (whether he is there or not). We don’t expect much change in his style,” one ministry official said. But he must change as the times cannot afford such a weak commander.

He must urgently fix three things about himself.

First of all, he should be extra careful with his words. Yoo unsettled the markets and government offices with half-baked ideas. He causally talked of quantitative easing and real estate measures without coordination with related offices. The deputy prime minister’s words have weight as they can affect the markets greatly. The economy and country is in an emergency state. Investors could shun local markets if they lose confidence. He must remember his every word could put at stake the credibility of government policy and the Korean economy.

Second, he must be resolute. Yoo pledged a strong corporate restructuring, but the work on the troubled shipbuilding and shipping sectors has been questionable. Labor reforms have gone astray. He claimed himself a champion of fiscal integrity, but the repeated need to create extra budgets has widened the fiscal deficit. What needs to be done is already laid out. He simply needs to push forward with the agenda. If he wavers, so will the economy.

Last, we need an economic commander in full gear. His presence must be seen and felt to give confidence to foreign investors and credit rating agencies that the economy remains intact regardless of the political insecurity. Appointments in government offices have been delayed because state affairs had been in a stalemate for the last two months. Yoo must not leave affairs to the president or the acting president. As head of public economic policy, he must take full charge and make the right choices without looking over his shoulder.

The opposition has allowed Yoo to maintain the office, probably because they thought he’d fail. Yoo must make the Minjoo Party regret retaining him by doing an excellent job. He must prove that it was the right choice for him as well as the nation that he stayed.