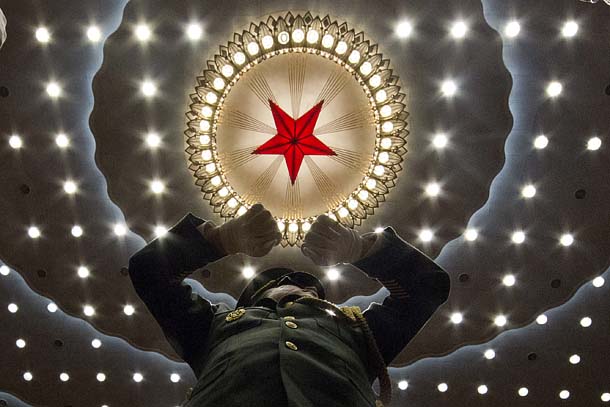 A Chinese military band conductor leads the band at the opening session of the annual National People’s Congress in Beijing’s Great Hall of the People, March 5, 2016. [AP/NEWSIS]

How China manages its currency is likely to be the global economic story of 2017. Despite the government’s best efforts, capital continues to leave the country at a brisk pace, with a balance-of-payments deficit through the third quarter of $469 billion. Attempts to arrest this flow probably won’t work. But they may well create new risks.

Capital outflows began gathering steam in 2012, when the government liberalized current-account payment transactions in goods and services. Enterprising Chinese figured out that while they couldn’t officially move money abroad to buy a house via the capital account — individuals are barred from moving more than $50,000 out of the country each year — they could create false trade invoices that would allow them to deposit money where they needed it. The result was a huge discrepancy between payments recorded for imports and the declared value of goods passing through customs, amounting to $526 billion in hidden outflows last year.

The problem has only worsened in 2016. French investment bank Natixis SA estimates that outflows will total more than $900 billion this year, despite new restrictions on yuan movements, including prohibitions on using credit and debit cards to pay for insurance products in Hong Kong.

Last week, the government added yet another restriction. It announced that all international capital-account transactions of more than $5 million will need to be approved by the State Administration of Foreign Exchange. This has businesses deeply concerned, given that the administration likely doesn’t have the manpower for the sheer number of transactions it will need to review. And if such restrictions can be placed on the capital account, it seems only a matter of time until they’re imposed on goods and services transactions.

All of which raises a simple question: Why is Beijing working so hard to prop up the yuan and crack down on outward capital flows?

The common answer is that it fears the trade consequences of a declining yuan. But that’s not it. Since the government devalued the yuan on Aug. 11, the combined value of imports and exports has fallen by only 8 percent, even as the value of the yuan has fallen 8 percent against the U.S. dollar.

The real reason is that the government is concerned about the implications of further liberalizing. China’s rickety banks, with delinquency rates of 30 percent, are receiving regular liquidity injections from the People’s Bank of China. Money market rates have been rising, from under 2 percent this summer to above 2.3 percent in Shanghai today. Allowing international capital mobility could easily trigger larger withdrawals — and hence liquidity crunches for banks already feeling the pinch of bad loans.

In other words, China is caught between trying to prop up a currency facing long-term decline and letting capital leave at will.

This is an unenviable position. But the government needs to accept that the days when it could micromanage its currency to run massive trade surpluses while accumulating large foreign-exchange reserves are history. All evidence points to the probability of long-term net capital outflows. Chinese buying homes in Vancouver and Sydney aren’t going to bring capital back home anytime soon.

The government also needs to tackle some longstanding problems. It has been talking about deleveraging for more than a year, yet total social financing has grown by 15 percent year-to-date, about twice the rate of gross domestic product. If the financial system wasn’t in such bad shape, the risk of a falling yuan would be significantly lower, yet the government has shown little appetite for addressing the underlying problems facing banks.

All this might simply amount to a setback for the country. But the longer real reform is put off the larger the ultimate price tag becomes. Financial crises or hard landings never happen for one reason, but rather a confluence of events. If China doesn’t begin tackling these problems now, the probability of such a crisis will grow.