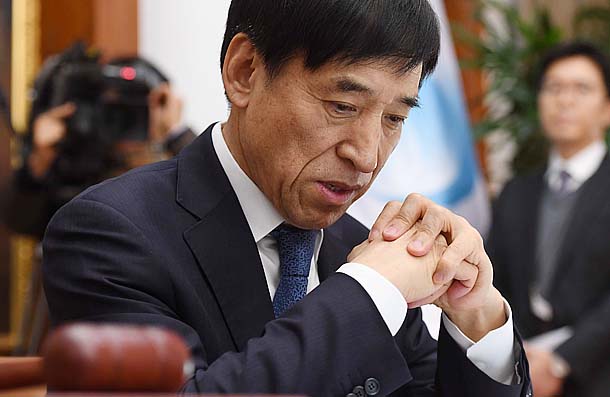 The Bank of Korea kept its key interest at 1.25 percent Thursday in a unanimous decision as the central bank opted to pause to gauge the impact of a U.S. rate hike and the National Assembly’s decision to impeach President Park Geun-hye.

The U.S. Federal Reserve Bank on Wednesday executed a much anticipated rate hike, establishing a range between 0.5 percent and 0.75 percent, up 0.25 percentage points from the previous range of 0.25 percent and 0.5 percent. This was the second hike in a decade. The first was in December 2015.

The key factor that attracted market attention was not Wednesday’s rise but how much further the U.S. central bank would raise rates next year. The Federal Open Market Committee (FOMC) speculated Wednesday that the Federal Reserve will raise interest rates in three separate quarter-point moves. The Korean central bank governor Lee Ju-yeol considers that as one of the downside risks for Korean economic growth.

The central bank has to handle conflicting imperatives. On the one hand, the Bank of Korea may need to raise rates in line with the U.S. Fed to prevent capital from fleeing Korea to go to the United States. On the other hand, the central bank also needs to prop up a domestic economy that has seen below 1 percent growth for four consecutive quarters, which could be done through an additional rate cut. 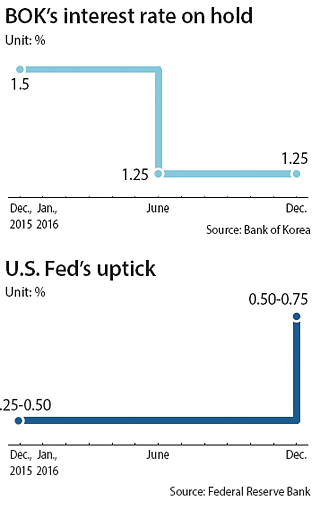 Lee indicated Thursday that he is wary of calls for an imminent rate cut.

“I know there are voices that advocate a rate cut,” he said, “But now we are in a situation where economic stabilization carries weight,” which implied that a rate cut could be premature.

“Several economic institutes have issued grim economic outlooks and are demanding a rate decrease,” he said. “But in deciding the benchmark rate, we should factor in different points including surging household debt, the possibility of capital outflows and macro-economic conditions.”

Analysts said that growing household debt, in particular, will get in the way of a possible reduction in the country’s key rates.

“The Bank of Korea cannot cut the rate even if the Korean economy recovers. If the gap between the U.S. rate and Korean rate becomes wider, more capital may pour out of the Korean market,” said Ha Keon-hyeong, an economist from Shinhan Investment.

“Of course, there is also the element of rising household debt. The government did come up with measures to curb household debt but mortgage loans are increasing rapidly,” Ha said.

Household debt in Korea shows no sign of abating despite the government’s effort to rein it in. In November, household loans taken out from local banks swelled by 8.8 trillion won ($7.4 billion), the second highest monthly increase since records were kept in 2008.

The data announced on Wednesday showed that by the end of November, the total amount of household debt had reached 704.6 trillion won, a record high of loans borrowed from commercial banks.

In assessing the current economic conditions, Lee underscored increased downside risks that come from external factors such as the uncertainty of policy under U.S. president-elect Donald Trump and the abuse of power scandal involving President Park Geun-hye and her confidante Choi Soon-sil.

“The pace of rate increases, expected protectionism that will likely emerge with the Trump administration and political uncertainties in Korea all act as downside risks,” said Lee at a press briefing after the rate-setting meeting.

“Overall, downside risks appear to be greater than [upside risks].”

Lee added that the Bank of Korea would factor in the growing downside risks when it adjusts its 2017 economic outlook in January, a hint that it might lower the previous forecast of 2.8 percent growth.

Higher interest rates in the United States could make it harder for Korea to manage its exploding debt and block capital from fleeing. After last year’s U.S. rate hike, over 6 trillion won fled the country for three months after the decision.

But the governor toned down the possibility of investors moving out of Korea in droves.

“The rate hike by the Fed was largely expected,” the governor said, “A massive capital outflow is unlikely.”

Analysts hold varying views about the impact that the gradual but faster- than-expected rate hikes in the United States will have on Korea’s economy.

“First in the financial market, the exchange rate will experience an immediate and direct impact,” said Ha of Shinhan Investment. “The FOMC came out with a hawkish stance and eventually, this will lead the dollar to strengthen and the won-dollar exchange rate to go up.”

But others say that factor has been already priced into the markets.

“I mean many say the FOMC saying it will raise the rate three times next year, instead of twice - which they announced they would do in September - is a hawkish comment,” said Gweon Hee-jin, an analyst from Hanwha Investment and Securities.

“But the market has already taken the possibility of two raise hikes into consideration so three would have little impact.”

The Korean Finance Minister said the possibility of the U.S. central bank raising the key interest rate with such an aggressive attitude was unlikely.

“[The anticipation of raising the interest rate three times next year] is faster than what we have thought,” Finance Minister Yoo Il-ho said on Thursday after meeting with foreign investment companies and foreign commerce groups. “However, we will see if this will actually happen.”

He added that the government will monitor the situation and take necessary action if needed.

The Kospi tumbled at the beginning of the day on news of the interest rate hike in the U.S. but calmed later in the day, closing at 2,036, down 0.01 percent.