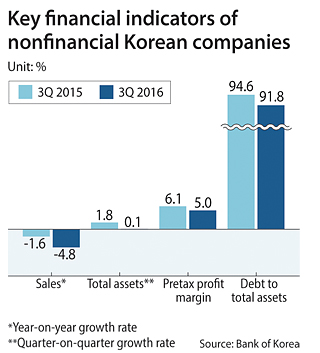 The sluggish economy continues to hurt Korean companies, which saw their sales fall and asset growth stagnant in the third quarter this year.

Third-quarter sales dropped 4.8 percent from last year, according to the Bank of Korea’s latest analysis of financial statements from 3,602 nonfinancial Korean companies. This is a sharper drop in comparison to the third quarter of 2015, when sales fell 1.6 percent year on year.

“This was largely due to falling sales in Korean manufacturing companies,” said a director in the bank’s economic statistics department. “Manufacturing companies saw sales nosedive largely because of falling oil prices. Our exports depend heavily on petroleum products, and with oil prices down, the prices of those products decreased as well, which eventually shrank the size of overall exports.”

In the non-manufacturing sector, the poor overseas performance of Korean construction and shipping companies pushed down year-on-year sales growth. The companies’ total assets grew a mere 0.1 percent quarter to quarter, a huge fall from 1.8 percent in 2015, suggesting stagnant growth.

In terms of profitability, the rate of increase in operating income to sales during the third quarter this year remained the same as in 2015. “Although the operating income to sales remained the same when comparing the third quarters of 2015 and 2016, compared to the first half of 2016, during which Korean companies enjoyed a 5 percent increase, the number actually went down,” the analyst said. “The recall of the Galaxy Note7 was a major setback. The suspension of production essentially stopped the upward trend for sales of Korean products.”

Korean companies still managed to improve their financial stability, though the improvement did not come from constructive means. According to the central bank, the debt ratio of surveyed companies went from 94.6 percent in the third quarter of 2015 to 91.8 percent this year. Based on the data, Korean companies grew more financially sound in the span of a year.

“Basically, companies were reluctant to invest and kept the capital for themselves,” the analyst said. “The return on their investment looked solid during the first half of 2016, but it kept low key in the third quarter. Companies were also hesitant to borrow more due to market uncertainties, making their financial statements in terms of debt look better than before.”