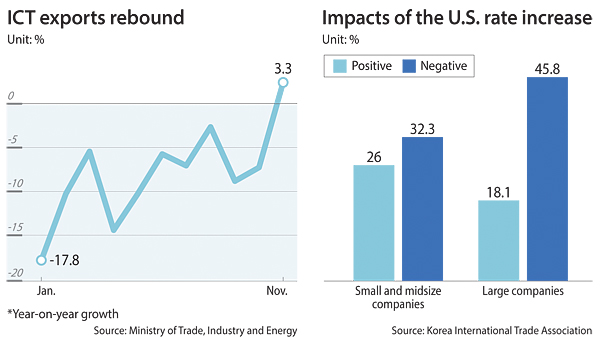 Exports of information and communications technology products climbed for the first time in 14 months in November, largely thanks to the semiconductors sector that remained strong as more smartphone manufacturers entered the market and as the prices of memory products rose.

ICT exports rose 3.3 percent year on year to $14.8 billion, and this was the first yearly increase since October 2015, the Ministry of Trade, Industry and Energy said Thursday. Since a year-on-year decline of 1.6 percent last October, exports have continued a downward slide until last month.

“Even though exports of cellphones continued to drop, the ICT exports last month managed to grow when compared to the previous year largely due to semiconductor, display and computer-related products,” said Kim Jong-joo, a director at the Trade Ministry.

After posting a 1.7 percent increase in October, semiconductor exports rose for the second consecutive month. The prices of dynamic random-access memory with 4 gigabytes of capacity rose from $2.34 in October to $2.55 last month. The prices went up 52.7 percent compared to $1.67 in July this year.

Exports of cellphone-related products fell 27.4 percent year on year to $2.09 billion. Mobile phone exports have declined for seven months, after a 27.8 percent year-on-year increase in April turned into a 26.5 percent drop in May.

The ministry cited midprice smartphones produced by Chinese manufacturers as one of the other biggest factors in the collapse of cellphone exports.

Exports to the United States rose 4.9 percent year on year to $1.48 billion and jumped in Vietnam 42.2 percent to $1.38 billion. Exports to China, including Hong Kong, on the other hand, dropped 3.6 percent to $8.05 billion and those to the European Union countries fell 1.9 percent to $770 million.

Even though ICT exports have improved, analysts are concerned that the interest rate increase in the United States might have negative impacts on Korea’s exports since it will strengthen the value of U.S. dollar, which will hurt emerging markets.

Korean exports companies will face some challenges due to the recent interest rise in the United States, the Korea International Trade Association (KITA) said on Thursday.

“Exports might fall down as it is expected that emerging markets will experience slow economic growth after the interest rate hike as many foreign assets in such countries are likely to leave their markets,” KITA said in a report.

KITA surveyed 587 local companies that have exported more than $500,000 in 2015, and found many of them worried about their performances in emerging markets.

According to the survey, 34.2 percent of the respondents said the rate increase will have a negative impact and only about 25 percent said it will have positive impacts.

The data showed that 60 percent of companies exporting to Latin America believed the interest rate increase will have negative impacts, while 44.7 percent of those export to countries in the Middle East believed so. It was followed by Southeast Asian countries with 40.2 percent and the United States with 28.2 percent.

By size, 32.3 percent of small and midsize companies said the rate incrrease will have a negative effect, while 45.8 percent of large companies viewed it negatively.