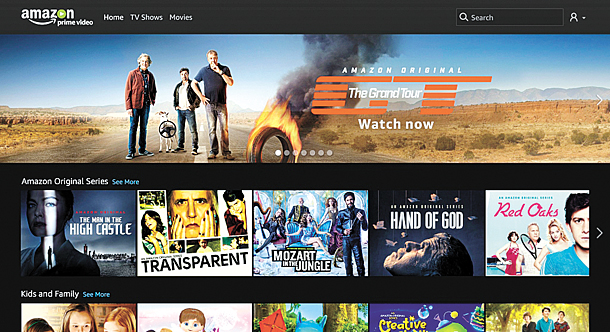 Amazon.com launched its Amazon Prime Video in Korea on Thursday, making the streaming and downloading service available in more than 200 countries and territories.

Entry of the e-commerce giant’s streaming service here is set to trigger competition with Netflix, which began here in January.

Customers in Korea may sign up for a Prime Video membership at PrimeVideo.com at an introductory price of $2.99 per month for the first six months, starting with a free seven-day trial.

After the six-month period, the fee goes up to the full price of $5.99 per month, Amazon said in a statement. The videos can be watched on Android and iOS phones and tablets as well as LG and Samsung smart TVs.

Current customers of Prime, a service that allows users to pay an annual fee for quick delivery and other benefits, may access the service for free.

“We are excited to announce that starting today, fans around the world have access to Prime Video,” said Tim Leslie, vice president of Prime Video International. “‘The Grand Tour’ and other critically acclaimed Amazon Original Series like ‘Transparent,’ ‘Mozart in the Jungle,’ and ‘The Man in the High Castle,’ along with hundreds of popular Hollywood movies and TV shows, are now available at the introductory price of only $2.99 a month. And what’s really exciting is that we are just getting started.”

But Amazon does not seem to care much about localization. Members can watch only in English, with French, Italian, Portuguese and Spanish subtitles and dubbed versions are also available for many titles, it said.

Korean subtitles are available with just 60 movies that were box-office hits - mostly Hollywood films - but not with the latest original series from Amazon. The “Mozart in the Jungle” show, for example, carried only six language pairs without Korean for subtitles and dubbing on Thursday.

Amazon’s latest expansion comes as it has been increasingly racing against Netflix on both price and availability. Netflix subscriptions start at 9,500 won ($7.99 a month) and are already available in more than 190 countries.

Not allowing content downloads has been considered a major defect of the Netflix service, which executives had long insisted they were unlikely to embrace.

Now the offline watch feature is available for many of the streaming series and movies that include Netflix’s original series.

Both services have been criticized for the size of their libraries outside of the United States but are competitive with strong original series. Amazon announced in August its first move into production of an original series in Korea.

“The Idolm@ster.kr” is a live-action drama series based on Bandai Namco Entertainment’s popular Japanese “Idolm@ster” series.

Netflix has been shooting Korean director Bong Joon-ho’s “Okja,” a feature film starring Tilda Swinton and Jake Gyllenhaal, since April, and the movie is scheduled for global release next year.