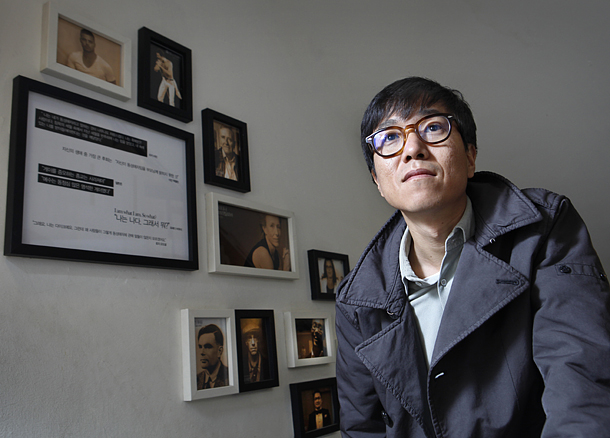 Rookie filmmaker Lee Dong-ha says that he hopes to be able to break down people’s prejudices of gay men through his debut film “Weekends,” which is set for a nationwide release on Dec. 22. [PARK SANG-MOON]

It all began with a simple wish to be remembered, along with a hope that the public would understand that they were not much different from anyone else. This is the story of the upcoming documentary “Weekends” that received international acclaim, including at this year’s edition of the world-famous Berlin International Film Festival.

Helmed by rookie director Lee Dong-ha, “Weekends” is a brave documentary that honestly looks at the reality of LGBT people in Korean society through G_Voice, Korea’s first gay men’s choir established in 2003 that meets every weekend to sing together.

“G_Voice members have long wished for their story to be recorded,” Lee, who used to be a member of the choir, said during an interview with the Korea JoongAng Daily on Tuesday. “There are lots of funny and interesting stories that go on when the members meet. Even though recording the lives of those in the gay community itself is a fight, they didn’t want to give up. And as some started to leave the choir after others died of illness, G_Voice decided to buckle down and put their lives on screen [before it becomes too late].”

Lee said that he was picked to make the documentary because he had been recording and editing G_Voice’s performances over the years. Helming the documentary wasn’t an easy job, as it took him four years to complete shooting the lives of choir members whose ages range from 20’s to 40’s. 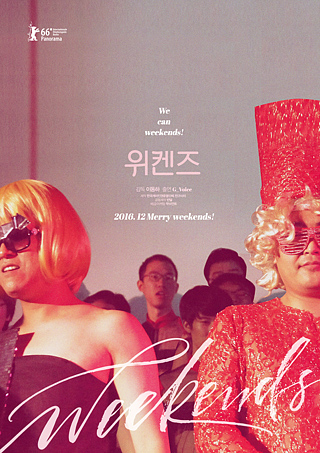 Although Lee simply decided to make their story into a documentary to celebrate the 20th anniversary of the Korean gay men’s human right organization Chingusai (literally translated as ‘between friends’), which was established in 1993, it received much more attention than the filmmaker was expecting. It became one of the three movies alongside E J-yong’s “The Bacchus Lady” and Yoon Ga-eun’s “The World of Us” to be invited to this year’s Berlin International Film Festival, where it was placed third in the Panorama Audience Award in the Panorama Dokumente section.

This documentary partly reveals the difficulty of living as a gay man in Korea. It looks at how they are often verbally abused or physically attacked by complete strangers for their sexual identity. One particularly disturbing instance is when G_Voice were soaked with feces-filled toilet water while performing at Korea’s first gay wedding in 2013. In response to the filthy attack, one of the members says that he “actually felt assured because it could have been a lot worse, such as being soaked with toxic chemicals or being targeted by someone brandishing a knife.”

“I felt my heart sink after hearing those words because he is one of the youngest members of the choir,” said Lee while recalling the scene. “For me, filming those people expressing hatred [towards gay men] was very tough because I just wanted to turn back on them.”

Despite frequently encountering such hardships, however, the filmmaker did not want to focus on the negative in the documentary, and it generally maintains bright mood throughout. It features the choir members going on dates, arguing over trivial things and, most importantly, caring for each other. The interesting and sometimes bold songs that G_Voice perform in the film also add another source of entertainment despite their sometimes imperfect performances.

“I [kept its mood generally bright] because I hoped that the audience could watch the documentary without feeling uncomfortable,” Lee said, and added that he hopes as many people enjoy the film as possible.

“The majority of Koreans have prejudice against homosexuals. There are not many people in the Korean society that are truly okay with homosexuality. But I hope to be able to break that wall of prejudice even little bit [through ‘Weekends’],”

In fact, the bright personality of G_Voice was seen at the documentary’s press preview that took place in central Seoul on Monday. The members filled the seats to show their excitement for the upcoming release.

“I initially felt embarrassed about revealing my face nationwide, but I was able to gradually muster up courage as I become more committed to G_Voice,” said one of its members with a joyous laugh.

Although it remains to be seen whether the hard work and the courage of these gay men would commercially pay off upon its nationwide release on Dec. 22, its rookie director is determined about his new career. Lee, who currently works in an office, is planning to concentrate on his film career from now on.

“I’m mulling over making a full-length movie for my next work. Although I haven’t precisely decided on what to deal with, I want to make a film that many people can watch. It might be a story about families with a gay child.”