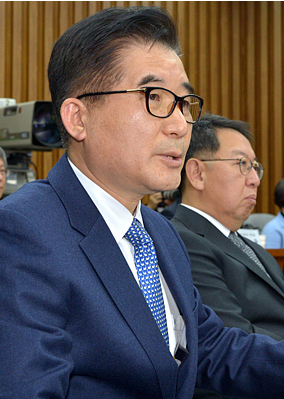 Cho Han-gyu, former president of the local daily Segye Ilbo, testifies at a parliamentary hearing on the Choi Soon-sil scandal on Thursday. [NEWSIS]

The former head of local daily Segye Ilbo made a bombshell revelation at a parliamentary hearing into the Choi-gate scandal Thursday that the Blue House spied on chief Supreme Court Justice Yang Sung-tae and another senior judge, raising questions over the Park Geun-hye administration’s commitment to the principle of separation of power.

Cho Han-gyu, who led the Segye Ilbo when it exclusively reported in late 2014 on shadowy links among Chung Yoon-hoi, the ex-husband of presidential friend Choi Soon-sil, and senior Blue House officials, told 18 bipartisan committee members that the Blue House drafted a classified report based on illegal surveillance of the head of the Supreme Court.

Cho said he has a copy of the report. He did not specify how the spying was done.

“Conducting secret surveillance on the head of the judicial branch represents a collapse of the separation of power and the constitutional order.

“It is a blatant constitutional violation,” said Cho, who said he was forced to step down in February 2015, three months after the exclusive report on Chung Yoon-hoi’s sway at the Blue House from behind the scenes.

In the surveillance report on Yang, the presidential office noted the chief judge was getting some pushback from court employees because he led a weekly campaign to go hiking every Friday.

Cho claimed to have a copy of another surveillance report on Choi Sung-jun, who was head of the Chuncheon District Court at the time.

The report, which was drawn up by the Blue House in January 2014, says that Choi, who is now president of the Korea Communications Commission, used a government vehicle for his personal use.

The report also says he sought favorable reports from the local press to help him get nominated to the Supreme Court, which didn’t happen.

Cho said the two reports were “direct evidence” of surveillance carried out by the Blue House on every court officials whose rank was senior judge or above. Cho submitted the two reports to the special legislative committee.

The Segye Ilbo ran an exclusive investigative report on Chung Yoon-hoi in November 2014 portraying him as a clandestine figure pulling strings from behind the scenes. After the report, the Blue House sued the paper for defamation and Cho was dismissed as president three months later.

Chung was summoned for the hearing Thursday but failed to show up. His whereabouts are unknown.

The former journalist also revealed that a sitting deputy-prime ministerial level official had bribed Chung with 700 million won ($593,103) for his appointment, another bombshell revelation.

“When I delved into the matter, I found that Chung Yoon-hoi recommended one person for a deputy-prime ministerial position and that person is incumbent.”

There are three incumbent officials with the rank of deputy prime minister: Finance Minister Yoo Il-ho, Deputy Prime Minister for Social Affairs Lee Joon-sik and Hwang Chang-hyon, head of the Board of Audit and Inspection of Korea.

At the Thursday hearing, three witnesses from Ewha Womans University who were grilled over giving special admission and grade treatment to Chung Yoo-ra, the daughter of Choi Soon-sil, denied wrongdoing, drawing a backlash from committee members from both sides of the aisle.

A special probe into the 130-year-old school found that professors had done school projects on behalf of the 20-year-old Chung and gave her good grades she didn’t earn. Despite the findings, all school officials who took the witness stand denied responsibility.

“The school carried out a probe into the matter and found there was no systemic preferential treatment for Chung,” said former Ewha president Choi Kyung-hee, who resigned amidst the scandal over Chung in October.