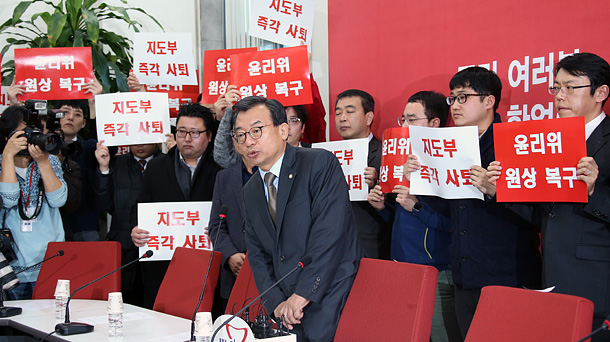 Officials of the Saenuri Party secretariat stage protests in the party chairman’s office on Thursday as they demand that all party leaders step down to take responsibility for appointing unethical lawmakers to the party ethics committee. Chairman of the Saenuri Party Lee Jung-hyun, center, refused their demand. [PARK JONG-KEUN]

Fates of the ruling party’s rival factions, split between loyalists of President Park Geun-hye and her opponents, will be sealed today through an internal election to select a new floor leader.

The Saenuri Party is scheduled to hold an election today to select the floor leader and chief policymaker, the first step to form a new leadership.

The conservative party, with 128 lawmakers, has been deeply wounded by a factional war between Park loyalists and her adversaries and is now on the brink of splitting after dozens of its representatives supported the opposition-led motion to impeach Park.

The motion to oust the president for a bizarre scandal over the influence she gave a friend in state affairs was passed overwhelmingly on Friday.

Rep. Chung Jin-suk, floor leader of the Saenuri Party, said earlier this week that he will step down from the post. The election for the new chief negotiator of the largest political group in the National Assembly is scheduled for today, and a head-on race is arranged between the two factions.

Because the losing side will likely face a political purge, the competition quickly heated up. The new floor leader selected today will also oversee the conservative party until it elects a new head. The current chairman, Lee Jung-hyun, vowed to resign next week to take responsibility for the party’s crisis. In a desperate attempt to win votes in the floor leader race, senior Park loyalists vowed to resign from the leadership next week.

“All members of the current leadership agreed to resign with Chairman Lee on Dec. 21,” said Rep. Cho Won-jin, a member of the Supreme Council. “If the party elects an impartial floor leader capable of reconciling the party, uniting the conservatives and accomplishing the constitutional amendment, we will not only dismantle the Park loyalist faction but also step aside from frontline politics.”

After Rep. Kang Seok-ho, a Park adversary elected to the council, resigned in November to protest the way the party was operated, Park loyalists gained sole control over the party. Non-Park loyalists including Reps. Kim Moo-sung and Yoo Seong-min, then, created their own group and largely contributed in the opposition-led move to impeach Park, only to deepen the rupture.

As the factional competition heated up, a group of lawmakers, who identify as neutral, held a meeting and requested the party to terminate the plan to elect the new floor leader, saying the new floor leader should be appointed through a consensus to promote the party’s unity.

About 20 lawmakers attended the meeting, and they agreed they will ask the election commission to delay the poll. They said both Chung and Na, who registered their candidacies, should be considered the new floor leader as well as other politicians who are not affiliated with any faction. They also said rival factions must also be dismantled immediately.

They added that they do not want to create another faction and all they hope for is the party’s reconciliation. The last-minute proposal, however, was rejected by the non-Park loyalist faction. Meanwhile, Chairman Lee’s latest attempt to protect the disgraced president backfired, worsening the Park loyalists’ crisis.

The party’s ethics council was scheduled to hold a deliberation today on the expulsion of Park from the party over the latest scandal.

In an attempt to protect the president, Chairman Lee appointed eight Park loyalists to the ethics council on Monday without consulting the council chairman Lee Jin-gon. Until Monday, the 15-member council was operated with only seven members, mostly outside experts.

Lee’s abrupt appointments to fill the vacancies immediately backfired as some of the newly named members have a history of sexual harassment, corruption and bribery. Ethics Council Chairman Lee Jin-gon held a press conference Tuesday night and condemned Chairman Lee’s blatant attempt to control the council.

“There is no meaning for us to be here,” he said. “They are just using us. They have no interest in restoring the people’s trust in the party and improving the party’s ethics. All they want is to protect the president. The ethics council is nothing more than a puppet.”

He and six existing members then resigned.

About 80 staffers of the party’s secretariat held a demonstration in front of Chairman Lee’s office on Thursday, demanding Chairman Lee’s immediate resignation over the shameful appointments.

“The pillars of a conservative political party are ethics and responsible politics,” a labor union leader of the Saenuri secretariat said, demanding Lee’s immediate resignation from the chairmanship. “The ethics council crisis destroyed the two pillars.”

“I am speechless,” said Rep. Kim Moo-sung, former Saenuri chairman and a key Park adversary. “I am embarrassed that this nonsense is repeatedly taking place in the party.”

Kim also said he will decide whether he will stay with the Saenuri Party or leave after the floor leader election. Rep. Yoo Seong-min, a high-profile opponent, also issued a press release to condemn the Park loyalists.

“I am baffled by the fact that Park loyalists dare to produce a candidate in the floor leadership race,” he said. “The only way to correct all the problems and start a conservative revolution within the Constitution and regulations of the party is by demonstrating our collective will at the floor leader election.”