Avian influenza strain is most damaging ever

Avian influenza strain is most damaging ever 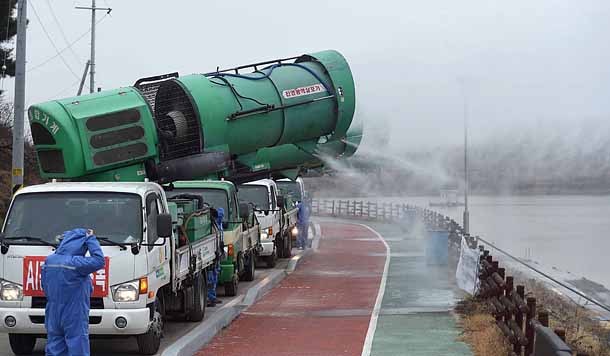 It’s official - the H5N6 avian influenza (AI) virus that touched down in Korea one month ago has caused the largest amount of damage the domestic poultry industry has ever experienced with bird flus.

No other AI virus in the past has killed this many birds. Egg prices are soaring, now fixed at around 6,580 won ($5.63) per tray of 30 at the largest discount retail chain, E-Mart. Paris Baguette raised prices by an average of 6.6 percent earlier this month, their first hike in almost three years.

According to local experts, the crisis will last through April 2017 unless the government dramatically reforms current measures, which have been criticized for being far too weak.

In an article published Tuesday, the Korea JoongAng Daily wrote that the first major government meeting discussing the outbreak was not held until one month after the virus was discovered on Oct. 28 in Cheonan, South Chungcheong, in the feces of migratory birds. By then, it had been a week since it reached nearby farms.

On Wednesday, the Ministry of Agriculture, Food and Rural Affairs announced that it would “negotiate” whether to raise the national AI crisis level to the highest of the four-tier system, from the current level 3. On Thursday it was upgraded.

“Things can really get worse unless the central government closely collaborates with regional governments and farms,” said Seo Sang-heui, a veterinary medicine professor at Chungnam National University in Daejeon.

Kim Jae-hong, dean of the College of Veterinary Medicine at Seoul National University, warned that for the domestic poultry farming industry the next one to two weeks will be a matter of “life or death.”

One problem is that regional governments are not doing enough to quarantine areas, due to a lack of human resources and money.

In a recent investigation by the Ministry of Public Safety and Security, there were 20 cases in which a government office wrote on official documents they set up an AI control team for their communities, but did not actually do so.

In Sejong City, a farmer was caught shipping off 100,000 chickens to his retailers last month and reporting to the government the next day that his farm appeared to be hit by AI. It later tested positive and authorities are now investigating whether he had known about the infection ahead of time.

In a country where the government relies on farmers to report viruses on their own, and punishes those who turn out to have failed to take proper quarantine measures in the first place, many farmers hesitate to report their circumstances.

Moreover, movement bans are imposed on poultry farmers and their vehicles at locations where the virus has tested positive, but rarely are these restrictions taken seriously.

Choe Nong-hoon, a veterinary medicine professor at Konkuk University in Seoul, thinks it is time for Korea to reform its entire poultry farming industry as current circumstances will only attract more forms of AI in the future. In Korea, chickens are normally raised in a closed, artificial setting, Choe said, as opposed to European countries and Japan, where free-range farming is more common.

Free-range farming is more expensive, but cheap goods can be replenished by foreign imports, said the professor.

“It’s about time to negotiate changes in related policies not just for Korea’s poultry industry,” Choe said, “but for the sake of public health.”