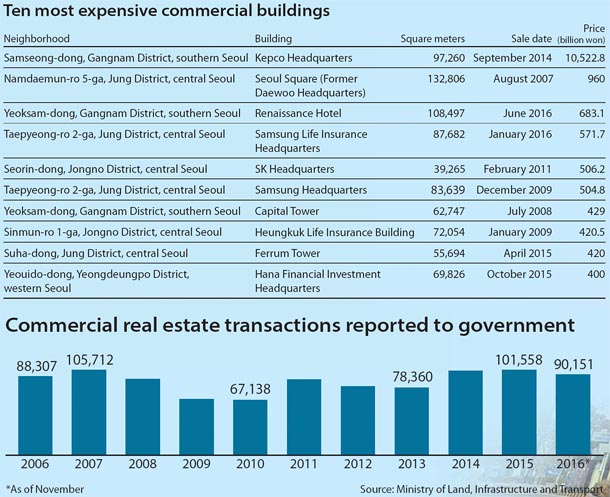 Early this year, a 60-year-old man surnamed Lee was looking to buy a small building with his retirement check and a modest bank loan. His plan, he said, was to live off the rent from leasing out commercial space.

But as soon as he started his hunt, Lee found himself with a slight problem: he didn’t know where to go for information about building prices.

The retiree was only able to estimate the price of buildings he was interested in by meeting with neighborhood real estate agents. When he finally did buy a building, Lee realized too late that he had paid more than the going price. “I felt like I was conned because I couldn’t find the exact value of the building,” Lee said. “I felt very angry.”

Investors scoping out buildings need not fret any longer. On Thursday, the government began operating a website (http://rt.molit.go.kr) that discloses the value of a building. The service is also available in mobile app form. 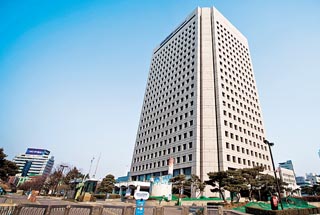 There are 940,000 commercial buildings listed on the site, along with the value of every transaction made since January 2006, when the government first began mandating sales be reported.

The trove of data offers some interesting insight into Korea’s commercial real estate market. The most expensive building sold in the past 10 years is the 97,260-square-meter (1-million-square-foot) former headquarters of the Korea Electric Power Corporation in Gangnam District, southern Seoul. It was sold to Hyundai Motor Group for 10.5 trillion won ($8.9 billion) in September 2014.

The second most expensive is the former headquarters of Daewoo, a hulking 132,806-square-meter building across from Seoul Station that sold for 960 billion won in August 2007.

Coming in third is the Renaissance Hotel in Yeoksam-dong, southern Seoul, which was sold this June for 683.1 billion won.

All 10 of the country’s priciest commercial real estate are located within Seoul. The most expensive outside the capital is department store franchise AK Plaza’s Bundang location in Seongnam, Gyeonggi, worth 374.8 billion won.

Until now, the government did not release any information on commercial real estate sales, despite keeping copious records. Private real estate information providers have released reports with estimated values of buildings, but they haven’t always been accurate. Additionally, information provided by real estate companies has often focused on large buildings rather than small ones because the data is more readily available.

Regarding the government’s new website, Kim Soo-sang, who works on land policy at the Ministry of Land, Infrastructure and Transport, said, “Other than expensive buildings, there is detailed information about the transactions of buildings that the average buyer or those who hoping to start their own business can use.”

Others have noted that the website still needs more details including building addresses and number of floors. “In the case of commercial or office buildings, the price varies sharply depending on each product,” said Lee Nam-soo, head of the real estate team at Shinhan Investment. “There’s not much you can learn without having the exact address.”

To get the additional information, individuals have to visit local district offices. But the government is reluctant in enhancing the details on grounds of protecting private information.

“If you have detailed information on the building, it is the same as giving away personal information,” a Land Ministry official said. “Once the [new] system is stabilized, we will upgrade it so that it can provide more useful information.”