Trapped in a historic vortex

Trapped in a historic vortex 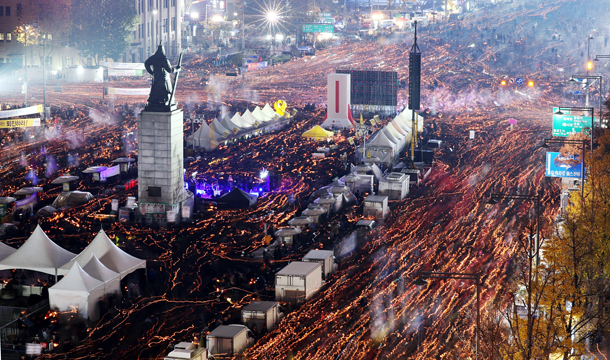 “I don’t care who the president is — I don’t know politics but am well fed and happy.” Is it impossible to remain so blissfully ignorant in 21st century Korea?

At least in the winter of 2016, it is a distant dream for the people lighting candles in the squares that such thinking may soon fade. But many Koreans are too busy and tired to hold candles on cold winter days, press the National Assembly to impeach the president or examine the bruises on President Park Guen-hye’s face before finding out that the “garlic shot” she allegedly received does not contain garlic. American diplomat Gregory Henderson called Korean politics a “vortex,” and in 2016, Korea is trapped in a historic vortex.

Henderson wrote in his book, “Korea: The Politics of the Vortex,” that Koreans are politically oriented and compete for power but get trapped in the vortex of chaos without resolving the key issues. He wrote that Korean society never had the time to allow an intermediary among individuals, groups and government to mature.

The book was published in 1968, but his insight is still painfully accurate. While Korea accomplished democratization, the vortex is still here. The gigantic vortex of the Choi Soon-sil scandal plays with not just the government administration but also the democracy of Korea altogether. Hasn’t the vicious cycle of waiting for and raving over a Messiah-like leader and then being disappointed and angry revisited the country, rather than building a solid system of democracy?

I found a clue to the solution in “Time of Accumulation” published last year by 26 scholars at Seoul National University’s engineering school. It points out that Korean industries grew rapidly by imitating developed countries’ models, but have reached a limit.

What is needed now is the ability to seek creative solutions. We need to learn from our mistakes.

We are in despair and anger, but rather than being depressed and oblivious, we should use the crisis as a chance to reach a creative solution. This may be the time to turn failure into success, crisis into an opportunity.

If not, we will only become accustomed to despair amid vortices small and large decades and centuries from now.