Ramen hikes to put a dent in Koreans’ wallets

Ramen hikes to put a dent in Koreans’ wallets 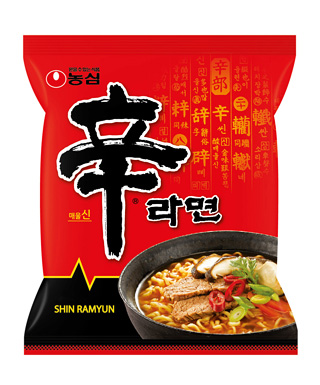 Nongshim, Korea’s leading ramen manufacturer, said Friday it will hike the price of its flagship Shin Ramyun, along with 17 other products for the first time in five years and one month.

The price hikes will average 5.5 percent.

Shin Ramyun, the longtime leader in Korea’s instant ramen industry, will retail for 830 won (70 cents) a pack from Tuesday, 6.4 percent higher than the previous price of 780 won.

Neoguri Spicy, one of Nongshim’s oldest products, known for thicker noodles, raised its price from 850 won to 900 won, a 5.9 percent hike.

The price of Chapagetti, Nongshim’s version of jajangmyeon, rose from 900 won per pack to 950 won.

Nongshim said the price hikes were inevitable due to the rising cost of human resources, logistics and marketing.

“Since ramen products are closely related to people’s daily lives, we tried to minimize the hikes as much as possible,” said a Nongshim spokesperson.

Products that were recently launched such as the Jjawang and Mat Jjamppong, which are considered premium products, will not see price hikes, the company said.

Industry rival Ottogi, known for Jin Ramen, said it has no confirmed plans to raise prices any time soon.

Industry insiders speculate that a price hike by the No. 1 industry player will lead other companies to follow suit.

In other food and beverage sectors, products that are standards in Korean homes have seen prices rise recently.

In October, Oriental Brewery, the leading beer company in Korea, raised the price of its entire domestic lineup by an average of 6 percent, including its flagship brand Cass. The price hikes were the first in four years and three months.

Last month, Coca-Cola also increased the price of its Coke and Fanta products by an average of 5 percent.

Paris Baguette, one of the most widespread bakery chains in Korea, said earlier this month that it would raise the price of some 193 items by an average of 6.6 percent due to rising production and management costs. The price of red bean buns, a popular item, went from 800 won to 900 won, a 12.5 percent hike.

The consumer price index, which is sensitive to price changes in consumer goods, has been recording continuous growth in recent months. While maintaining below-zero year-on-year growth in the first half of the year, it has been growing at over 1 percent since September. The growth hit its highest recent level in October and November this year, 1.5 percent.