Some energy drinks pack in the sugar and caffeine

Some energy drinks pack in the sugar and caffeine 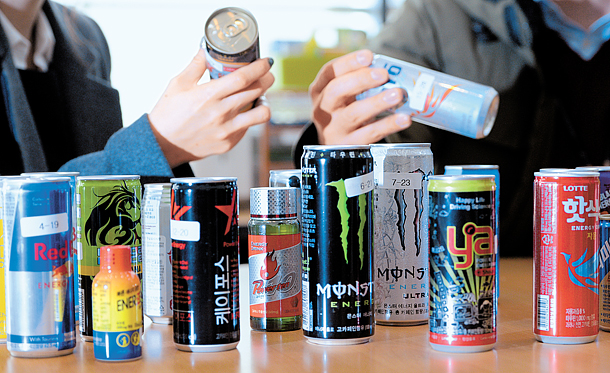 Twenty energy drinks including Red Bull and Monster that were tested by Korea Consumer Agency are displayed at the Fair Trade Commission’s office in Sejong on Thursday. [NEWSIS]

The average amount of caffeine was 58.1 milligrams per unit and the range varied from one milligram to 162.4 milligram. Samsung Pharm’s Ya, which came first by a far stretch, had a caffeine content 130 percent higher than the daily recommended amount for teenagers, which is 125 milligrams. The list’s second drink, K-Force Power Energy, had 98.3 milligrams. The top five drinks had more caffeine than the average 175-milliliter canned coffee, which contains 74 milligrams of caffeine.

Sugar content varied from none to 38.6 grams (7.72 teaspoons) per unit. The average was 16.8 grams, but 11 had more than 20 grams. Coca-Cola’s Monster Energy was the list’s leader with 38.6 grams, which is equivalent to 77 percent of the daily recommended amount of sugar per day, which is 50 grams.

Half of the drinks contained around the same amount of sugar as a 250-milliliter can of Coca-Cola, 27 grams. Products with zero sugar used sweeteners for their flavor, which are not absorbed in the body.

The research revealed that three products — Monster Energy Ultra by Coca-Cola, XS Cranberry Blast by Amway Korea and Enerzen by Dong-A Pharm — violated laws by omitting information about ingredients or providing inaccurate information. Enerzen was given a warning for exaggerative advertising on its official homepage. All three companies are said to have accepted the agency’s suggestion for amendments.

Under current law, every beverage sold in Korea is obliged to specify its ingredients on the package.

“Both caffeine and sugar are contained in a lot of products we consume on a daily basis other than energy drinks, so our advice is to be aware of the recommended daily amounts and try not to surpass the limit,” said a spokesman for the Korea Consumer Agency.

The recommended daily intake of caffeine for adults is a maximum of 400 milligrams and 50 grams of sugar.